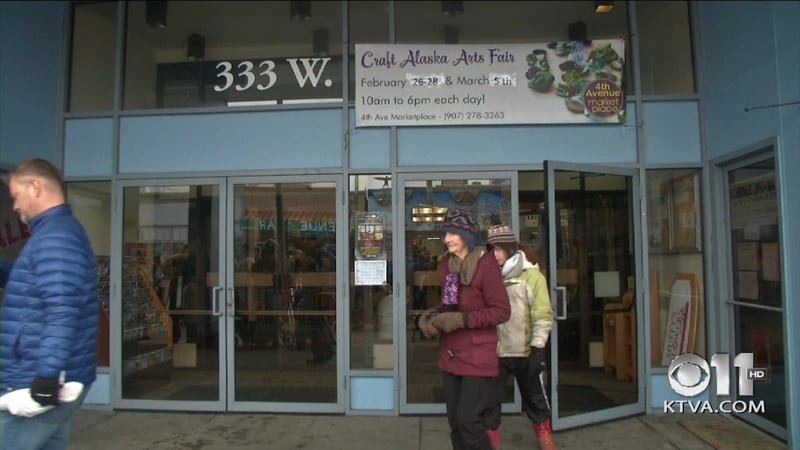 After two years in business at the Fourth Avenue Market Place, Gail Jones is closing up shop.

Her business, Jonesers Handmade Nectars, is one of several that have left the mall in the past year.

“I’m the one that’s lasted here the whole time,” Jones said. “I’ve seen everyone come and go. They just couldn’t make it. They thought it was a great spot.”

She set up a table of teas and nectars at the Fur Rondy craft fair in front her soon-to-be-empty store.

Despite the big crowds during the winter carnival, Jones said there wasn’t enough business to sustain her own storefront.

“What we found is we do better at the markets, so that’s where we’re going to stay with our local people,” she said.

Around the corner is Scott Clendaniel’s studio. The artist, known for his beer paintings, moved in last year after finding the space during the craft fair.

“I’ve been really happy with it because it is centrally located to downtown,” said Clendaniel, who plans on signing another year lease. “There’s a lot of ways you can use the space to generate money besides walk-through traffic.”

The Fourth Avenue Market Place property management company said it wants to make it more cost-effective for vendors. Maintenance Manager Robert Good said plans are in the works to turn it into a co-op of sorts, similar to the Saturday Market during the summer.

“This space in here we can cut it up into six different spots for the vendors to set up,” Good gestured to an empty storefront. “Instead of one person paying for it, it would be six people.”

They’re also changing the feel of the inside, adding brick facades and park benches.

Thousands of people come downtown during the two weeks between Fur Rondy and the Iditarod Ceremonial Start. The Anchorage Downtown Partnership said it’s important to make the area a destination year-round by bringing in more businesses.

“It’s priceless,” said Executive Director Jamie Boring. “When you see people down here in the evenings, after hours, that are walking to the bars, walking to the restaurants, all the environments that provide a good, clean, safe downtown it’s an awesome experience.”

He agreed the market place needs an upgrade and thinks bringing in small, local shops could do the trick.

“We don’t have a place where Alaskans can have an Alaskan shop with a fish market and a cheese place,” Boring said. “Having a place that’s well priced, that’s new, exciting, fresh and clean that’s part of what we need to create for this continuing effort to revitalize downtown.”