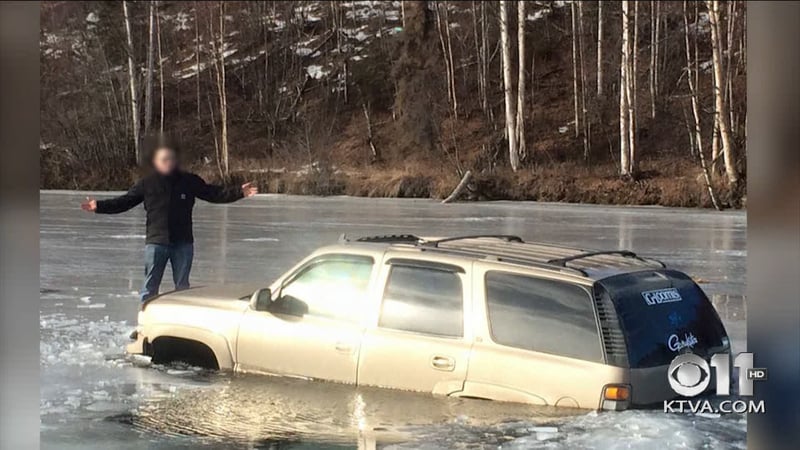 Ice fishing is a popular winter pastime around Alaska, but be careful if you’re using ice roads to get to your favorite spot. At least three vehicles have gone through the ice on Big Lake in the last couple weeks.

“There’s an ample amount of ice to support vehicle traffic, but there’s a number of variables that people have to take into consideration,” said Chief Ranger Daniel Amyot, with Alaska State Parks. “We’re experiencing above average temperatures and unusual weather this winter.”

It’s not just the warm weather causing soft spots. There’s a spring near Burnt Point on Big Lake where the ice is too thin to drive on. One Anchorage resident found out the hard way after sinking his truck last week.

“The water that’s seeping in from the bottom of the lake has a temperature above freezing so it’s going to be warmer water in those locations,” Amyot explained.

Drivers said at least two other trucks have ended up in the water while trying to navigate through the channels leading to lakes around Big Lake. Amyot said the ice in the channels will never be as thick as the main ice road because of the moving water.

On Tuesday afternoon, there was no shortage of people traveling on the ice road, hauling fuel and heavy machinery. Amyot said the ice is about two to three feet thick and can support a lot of weight. He advises people to learn the layout of the lake and check conditions before they head out.

“Whenever we’re asked whether the lake ice is safe to go on, we never are able to tell people it’s perfectly safe,” he said.

His best advice: Don’t stray too far from the main road so you don’t end up on thin ice.