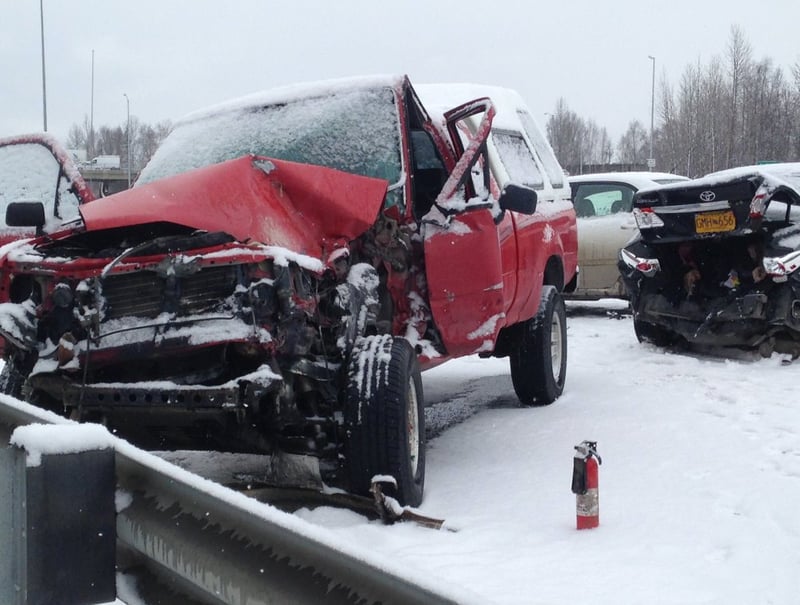 Both the Glenn Highway and New Seward Highway have reopened.

ANCHORAGE — Although it was a welcome sight, the snow in Anchorage Friday caused quite a few headaches and multiple car crashes around town.

Anchorage police issued an update shortly after 4 p.m. Friday stating that the inbound Glenn Hwy and Northbound New Seward Hwy were still closed. At 5:25 p.m., police alerted the public that one northbound lane of the New Seward Hwy had been opened near Dowling Rd.

The snow began falling in Anchorage around 10 a.m. and was complete by 3 p.m. The total snow accumulation was 1.7 inches, according to the National Weather Service.

According to the Anchorage Police Department, officers have responded to at least 61 vehicle crashes and 14 crashes with injury since 10 a.m. None of the injuries were life-threatening, according to APD spokesperson Jennifer Castro.

The inbound Glenn Highway is currently closed because of a 15-vehicle crash.How are the roads in your area?UPDATES — bit.ly/1TZAmaV

The inbound Glenn Highway has been closed at the Boniface Parkway exit to the Bragaw Street exit due to a crash involving at least 15 vehicles.

A collision between a pickup and a sedan near McCarrey St. was reported around 12:40 p.m., according to Castro. Multiple additional vehicles became involved in the collision “within a matter of minutes,” she said, resulting in the 15-vehicle crash.

Emergency crews were working to extricate one person stuck in a vehicle, but the person’s status was not immediately known.

Several cars are still in the ditch and at least two are blocking the main roadway. Crews are on scene working to clear the highway.

The Glenn Highway was initially shut down due to a crash at the intersection of Airport Heights Dr. Police received the call at 12:10 p.m. Medics were sent to the scene and multiple fender benders followed, according to Castro.

Police have also closed the northbound New Seward Highway near Dowling Road because of a multiple multi-vehicle crash and are asking drivers to avoid the area.

An initial crash involving multiple vehicles was reported to police at around 12:45 p.m. Multiple additional vehicles were reportedly piled up following the original crash. Police were unable to give a more detailed vehicle count.

As a result of other crashes nearby, police decided to close the entire stretch of highway between the Tudor Road and Dowling Road exits, according to Castro.

Medics were responding to the scene, but Castro could not provide specifics on injuries.

A separate hit-and-run crash was obstructing traffic on 36th Avenue and the Seward Highway.

The Anchorage School District sent out an alert Friday afternoon urging parents to drive carefully and warning that busses would be delayed as a result of the dangerous road conditions.

APD is advising all drivers to use care when driving on snow and ice.