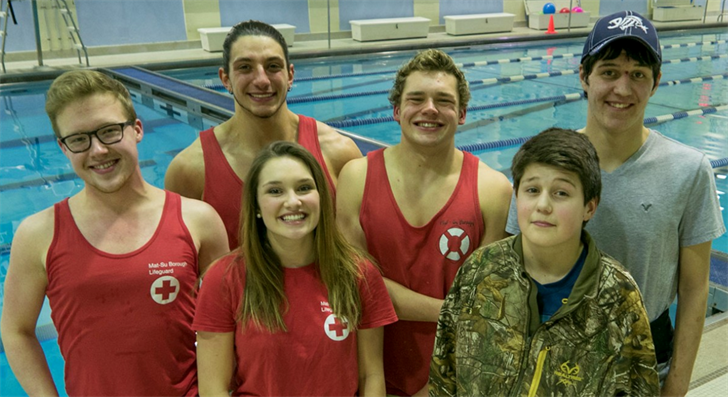 The team of lifeguards and Dustin Day (far right)

A teen has a group of young lifeguards and their quick actions to thank for saving his life after he suffered a seizure in the Palmer swimming pool, nearly causing him to drown.

On Feb. 18, brothers Dustin and Zachary Day were enjoying some time at the Palmer Pool when Dustin, 15, suffered a seizure. In an interview with Mat-Su Borough officials, Zachary said he noticed what was happening to his brother and called for help.

“Dustin’s brother said something to me and I look down and I see Dustin laying on the bottom of the pool,” said 16-year-old lifeguard Dominique Hinds, who was on duty when the incident occurred. “So I stood up and blew my whistle three times and jumped in the water.”

Dominique explained that three whistles was a sign for other lifeguards and staff members to come to the pool for help, and they did. One of the first to the deck was 20-year-old Daniel Jackson, who is a water safety instructor at the pool.

“I jumped into the water swam underwater to Dustin,” Jackson said. “By the time that I got there, I grabbed his waist, [Dominique] had his hand and assisted me to the surface with him with the tube. After that, we got him to the side, we were able to backboard him out get him up on the deck. At that time he was still unresponsive. Wasn’t sure if he had a heartbeat or if he was breathing.”

While Dominique and Jackson brought Dustin up out of the water, another lifeguard, 17-year-old Elliott Amato, helped an Alaska State Trooper and medical personnel find their way to Dustin’s side.

“We got him out of the water, I found a pulse on him, he was breathing,” Jackson said, adding that Dustin began coughing up blood and water while the team worked to revive him.

The group of lifeguards met up with Dustin and Zachary again in March, along with the boys’ great-uncle, Tim Pickard. Pickard is also the Mat-Su Borough pools manager. Pickard said he was thankful for the team’s quick response.

“The team was fantastic. They responded the way that they should have,” said water safety instructor Michael Foy. “Our training was very apparent in their quick response.”

Amato echoed that sentiment, stating, “Training can do a lot, but in the actual moment you have to go by instinct, and it’s definitely hard to do that.”

Dustin thanked his rescuers as well, and joked about taking along floaties next time he hits the pool.

“It’s gonna be awhile before I go swimming again, I can tell you that,” he said.