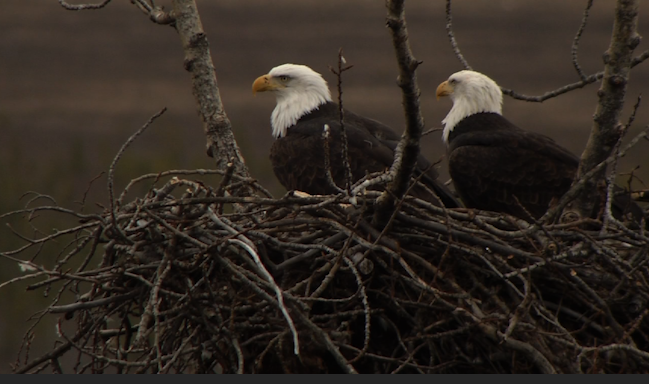 ANCHORAGE — An organization that helps injured birds says an eagle’s nest near their property is now occupied by a pair of nesting birds.

Bird Treatment and Learning Center director Guy Runco said the male and female eagle were spotted several days ago and appear to be getting ready for a family.

“They do seem to be building on the nest and adding on it from last year and they are obviously sitting on it now,” Runco said. “So I’m sure, if they don’t have eggs now, they are planning on laying some soon.”

Runco said the organization, known informally as Bird TLC, had plans to build on its property above Potter Marsh this spring. They wanted to move flight pens where injured eagles and other birds learn to fly again from Joint Base Elmendorf-Richardson where they’ve been located for more than 20 years. But the nonprofit recently learned about a Fish and Wildlife regulation prohibiting building near a nest deemed active.

Runco said the organization is willing to wait.

“Our mission is to educate the public about these very birds here, and to protect them, and to take care of orphaned and sick birds,” he said. “So the last thing we want to do is endanger anything that’s going on at the nesting area.”

Runco said if all goes well, the eagles will lay eggs soon and raise chicks that will leave in late August. Once that happens, Bird TLC can continue with their plans to build.

Editor’s note: The reporter is on the board of directors for Bird TLC.