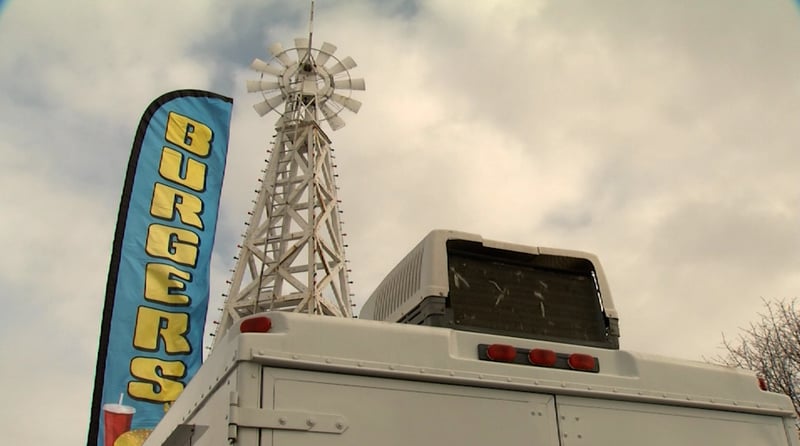 ANCHORAGE — Food trucks are back, and with new land use agreements giving mobile eateries a permanent place to set up shop near downtown Anchorage, there’s more where they came from.

The Spenard Food Truck Carnival held its seasonal opening Thursday, signaling the start of spring and getting hibernating Alaskans out for lunch.

“We wanted to see what this was about. We’ve never been,” Roger Peterson said while standing in line to buy cupcakes from Babycakes Cupcakes, Etc.

The food truck roundup has become a mainstay in the Chilkoot Charlie’s parking lot off Spenard Road. Featuring a rotating lineup of mobile restaurants, the carnival will open every Thursday from 11 a.m. to 2 p.m. until autumn.

This year will feature dozens of new menu options.

“We spent last summer putting the truck together,” said Mackenzie Moen with the Tasty Traveler.

The big white truck specializes in tacos and burritos with international flair. Moen says the Spenard Food Truck Carnival is the perfect way to boost business and spend quality time with coworkers.

“Working in a confined space, you’re definitely touching the people that you’re working with a lot, so you get used to that,” Moen said.

With so many choices from cupcakes to gourmet grilled cheese, the real question is: What’s for lunch?

“There’s a variety of foods that you can get here that you can’t get in restaurants anywhere around town,” said customer Nick Lynch.

Food truck enthusiasts say the popularity of “street eats” is on the rise in Anchorage, offering the lunch-hour crowd a wild ride of flavor.

There are 10 spots available for trucks, carts or pop-ups at the carnival, which also offers entertainment from Alaska Fire Circus and, as it gets warmer, live local musicians.

But food truck fans have another reason to rejoice – a new food hub is on the horizon for Anchorage.

Soon to be located in a now empty lot on the corner of 8th Avenue and K Street, the new dining attraction is best summed up by Huycke as a “food truck hub.”

The addition was a group effort on the part of the Anchorage Community Development Authority (ACDA) led by Andrew Halcro, the Municipality of Anchorage and Huycke on behalf of the food truck community. Together, they created a land use agreement that makes K Street Eats a legal and viable endeavor.

Mackenzie Moen with the Tasty Traveler makes a burrito during the Spenard Food Truck Carnival.

A food truck hub is not a new idea. Huycke and food truck owners tried to create something of the ilk with the Fireweed Take In last fall, which would have sustained food truck vendors throughout the winter. Diners could buy food from mobile vendors outside and bring it inside of the old Maxine’s location on Fireweed and C Street.

“Unfortunately, the land use agreement that the building owner has with the city on that location prevented us from actually operate that business, which was really a bummer, and they gave us a cease and desist order,” Huycke said.

Huycke said when news of the Fireweed Take In’s closure made it to the ACDA, Halcro got in touch with food truck vendors to create a solution.

“That’s when Halcro reached out and said, ‘Hey, a few of us want to do good for the food truck community. We see that our citizens of Anchorage want this. What can we do?’ And three months later, we get to have a conversation to debut what, you know, the entity of K Street Eats,” Huycke said.

K Street Eats is set to open May 2. The corner caravan will be open Monday through Friday from 11 a.m. to 7 p.m. on the southwest corner of 8th Avenue and K Street with 15 spots available to trucks, carts, trailers and pop-ups.

Huycke said in the meantime, he has set up a Facebook page for people to learn more about the food truck venture and next week the group will launch a Kickstarter campaign next week to raise money for supplies.

“Brand new tables, brand new tents, brand new trailer. I mean, everything is just going to be what we feel, on behalf of the food truck community, that Anchorage wants — and deserves, to be honest,” Huycke said.