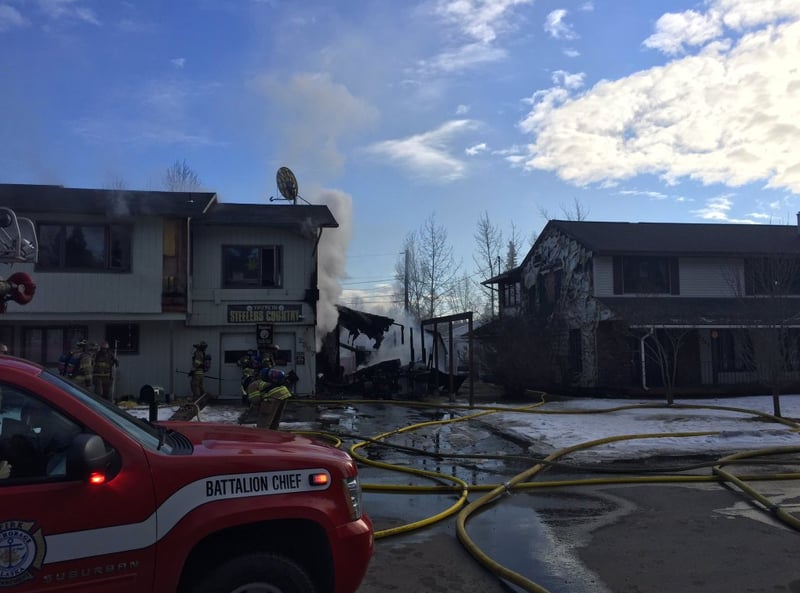 Thirteen Anchorage fire units were at the scene of a large residential fire in Anchorage Thursday evening that damaged two homes.

Fire dispatchers said the fire was first reported on the 2300 block of E. 47th Court at 4:49 p.m. Flames could be seen shooting up from the roof as smoke engulfed the second floor of one home. Another home next to it also appeared to have some cosmetic damage on the outside caused by the fire.

One of the residents inside the home, Sherry Poplarchik, told KTVA she was cooking when she heard “a loud bang,” and then neighbors ran to tell her the house was on fire. She gathered her grandkids and cats from inside the home and reported they were all able to escape without harm.

Poplarchik said the fire appears to have started in an attached room built on the outside of the garage. The room house the building’s furnace and boiler, she said. Fire dispatchers said the fire originated in or near the garage and then quickly spread to the rest of the house.

Poplarchik said she and her family will be staying with neighbors for the night until they figure out their next move.

As of 5:30 p.m., the fire department was able to put out most of the flames and begin checking for hotspots.

This is a developing story, please check back for updates. KTVA 11’s Eric Ruble contributed to this report.