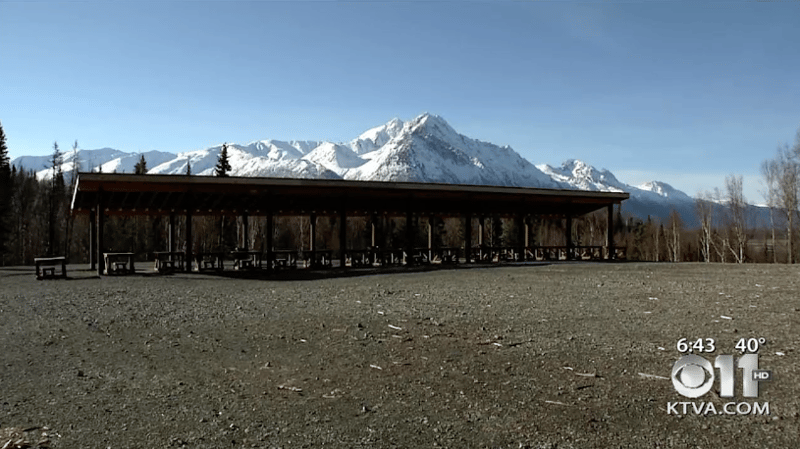 Clear skies, sunshine and calm wind — since spring began in Alaska, the Valley has seen perfect weather conditions for shooters to practice their aim at the Maud Road shooting range.

But on a recent Wednesday, the one day a week the range is closed, Alaska State Troopers gave out four citations to residents who violated the rules. So far this month, troopers have given out 12 citations, a slight increase from three given out last month and one citation in January.

“The most common ones that I run into are shooting during closed period … shooting at targets that we don’t allow out here,” said Trooper Ernie Brent, who patrols the Maud Road area. “Paper, wood and clay are the only type of targets that you can shoot. Routinely, I see people come out here with TVs and soda cans and milk jugs and things like that.”

The rules of the range are nailed to all 19 posts at the Maud Road range, located in the Knik River Public Use Area, where Travis W. Jensen is the land manager. The range often gets a ton of traffic — up to 200 people cycling through on a Sunday — says Jensen, noting its appeal.

“People come out from Anchorage, Big Lake to shoot here because of the ease of access, the level of facilities we have and the fact that it is free,” said Jensen, adding that the closest range is 32 miles away.

The citations were less of an issue over the winter. But an early break-up season could be to blame for the uptick in citations, AST says.

“I think the majority of it is people coming out here, they want to shoot, they drive all the way out here, they realize the range is closed, they just decide to shoot anyways,” said Brent. “It’s really set up for success for the shooter out here with the amount of signs … It just takes a quick minute to read those and not get yourself a citation or in any trouble for anything.”

Keeping the range clean and safe — and, ultimately, free to use — Jensen and Brent say they can’t do it alone. Both credit the Maud Shooting Range committee, a group of volunteers from the community, for helping to keep watch over the range when they aren’t immediately available. The weather warm-up will undoubtedly bring more shooters to Maud Road, but those invested in the range’s success want users to know a free shooting range doesn’t mean it’s a free-for-all.

“Came out here late, real late one night, it was just after midnight, and there were some people who were parked at the pistol range,” said Brent. “And they were using the high beams of their vehicles to point downrange to see the targets they were shooting at.”

Brent says not only were their actions “unsafe on a number of levels,” but it was also disruptive to the families who live in the area. Keeping the range family-friendly is important to the community as well, says Brent.

“We want citizens to feel comfortable bringing their families out here. We want them to feel OK to bring their kids out here, teach them how to shoot,” said Brent. “That’s what this is all about, it’s passing on those values that Alaskans have.”

On April 30, the Maud Road shooting range will host a “spring cleanup,” from 8 to 10 a.m.. The community is invited to come give the range a “heavy-duty clean” to welcome the start of Alaska summer, the committee says.