FRANKLYWNOW - Alaskans prepare for the worst in disaster drill

Alaskans prepare for the worst in disaster drill 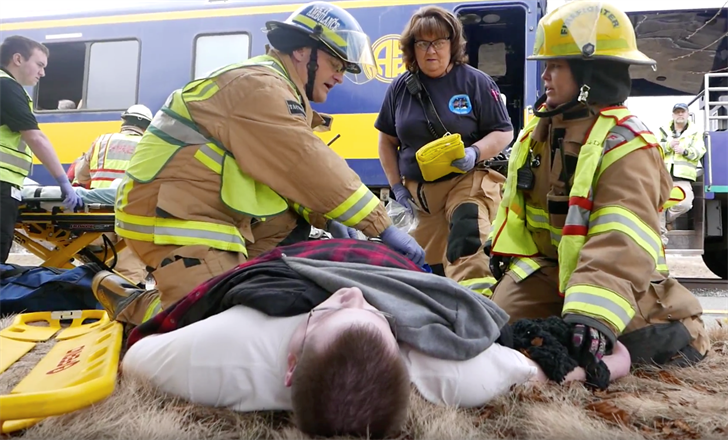 The Alaska State Fairgrounds looked very different Saturday than it does in September. Instead of food stands and amusement rides, the area was filled with emergency vehicles and first responders. It was all part of the Alaska Shield initiative, which brings in multiple agencies to rehearse their response to a large-scale catastrophe.

One of the scenarios practiced Saturday was a leak from an Alaska Railroad car. The trains regularly transport massive amount of fuel and ammonium nitrate, so crews learned how to cap a leak of hazardous material.

“We don’t do those calls everyday. So it’s nice to practice that and prepare for the worst,” said Casey Cook, the Mat-Su emergency services manager.

The other faux disaster was a crash between a school bus and a train. It involved getting 50 volunteers guised up in makeup to mimic what a disaster would look like. People of all ages — including a boy scout troop — had fake wounds to their heads, torsos and legs.

“The visual impact actually has a large effect on the mindset of the emergency responders,” said Bill Mackreth, the Mat-Su EMS training coordinator.

He said even longtime first responders can become more efficient during a disaster by practicing in a situation that looks real.

“This helps people come to terms with the blood and gore, and also to remember to keep their focus on what really matters instead of what’s visually impressive,” Mackreth said.

One of the youngest volunteers said the exercise was as fun as it was important.

“We can learn about how our community works,” the 13-year-old said. “If there was an emergency, we’d all know what to do.”

The post Alaskans prepare for the worst in disaster drill appeared first on KTVA 11.