Alaskans ‘Brave the Shave’ to raise money for cancer research 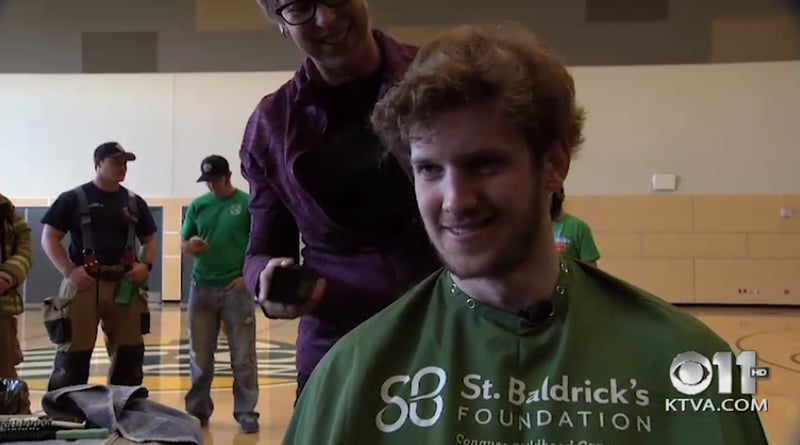 Dozens of Alaskans volunteered to shave their heads Sunday to raise money for childhood cancer research — men, women and children. It’s all part of the St. Baldrick’s Foundation’s annual event.

University of Alaska Anchorage Hockey teamed up with Anchorage firefighters to make this year’s event happen at the Alaska Airlines Center.

He and many people at the St. Baldrick’s Day event chose to participate on the spot. And volunteers said they’ve never seen as many women shave their heads as they did this year. At least 10 brave ladies gave up their locks for the cause.

A gesture of support that, for some, is very personal.

“My little sister had cancer and I’ve decided since then to start helping with trying finding a cure for cancer,” said Logan Bloechl.

He’s one of the roughly 50 people who signed up in and advance and fundraised. This was his sixth time participating.

“It’s interesting at school when everybody asks, ‘Why don’t you have any hair?'” he said.

“The one thing I’m not looking forward to is my friends getting their hands all over my head!” he joked.

His dad, Cary Taylor, a four-time St. Baldrick’s Day participant, has been growing his beard all year, just to shave it off.

Organizers said at least 100 people braved the shave Sunday. And whether veterans or first-timers, they came together for one reason: They’re fighting a battle they know they can win together.

“At the end, it came through and she survived,” Bloechl said.

Organizers said they’d raised more than $19,000 by Sunday morning before people showed up to donate in person.

The St. Baldrick’s Foundation is run by volunteers, and uses the money they gather at events like this to fund more childhood cancer research grants than any other charity, according to their website.

The post Alaskans ‘Brave the Shave’ to raise money for cancer research appeared first on KTVA 11.