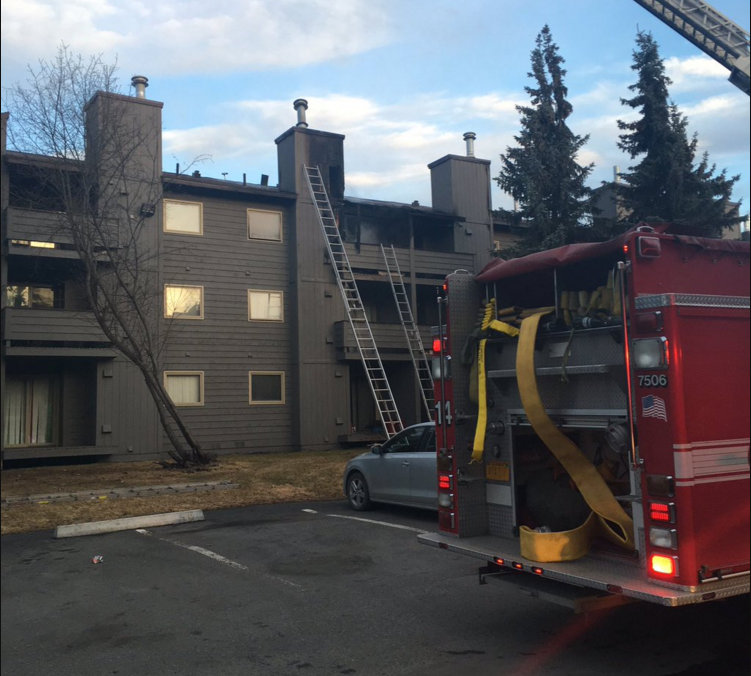 Neighbors awoke to the sound of sirens Monday as the Anchorage Fire Department responded to an early morning fire at 1580 Russian Jack Drive.

Dispatch received the call at 6:26 a.m., according to AFD Assistant Chief Alex Boyd.

When units responded to the address, they found smoke and flames coming from a third-floor deck in an apartment in the complex. Due to the size of the building and reports of one person missing, more units responded. There were 18 AFD units dispatched to the fire, Boyd said.

According to AFD battalion chief Richard Hood, the occupant woke up and discovered the fire. Hood said they believe the fire started on the outside deck of the apartment, causing significant damage to the roof.

“There were lots of people outside, just everywhere,” said Cody Thomas, a resident of the building. “They were in their pajamas, some weren’t wearing shirts or pants. Some didn’t even have shoes, they were just all in blankets.”

Some of the tenants thought the alarms were part of a fire drill, including Candy Jones.

“We got down the stairwell and there was a cop and she said, ‘Get out, get out there’s a fire,'” she said. “We come around the corner and there’s just flames all on the top deck. So we had to run back, get the cats, put them in the crate, get the dog. He was scared, had to carry him out.”

Assistant Chief Boyd said the fire was deemed to be under control at 7:10 a.m. AFD had called in their fire investigator and Red Cross of Alaska, according to Boyd. The missing resident was later found off-site. According to AFD, there were no injuries reported in connection with the fire.

Tanguy Libbrecht, CEO of Red Cross of Alaska, said in a phone conversation Monday that preliminary estimates from the scene were at least three apartments were affected by the morning’s fire. Libbrecht said Red Cross was on scene and working to establish the needs of families.

Major damage to roof/chimney in Russian Jack apt fire. No injuries and no word yet on # displaced @ktva #Anchorage pic.twitter.com/JxVbUcchXA

Residents from 43 units in this Russian Jack complex wait to get back in after this morning’s fire. pic.twitter.com/zqoLHnGExO

Weidner Apartment Homes manages the apartment complex and stated the occupants on the third floor directly affected by the fire had temporary housing at other Weidner apartment complexes around town.

Correction: An earlier version of this story identified the property management company as Widener. This has since been corrected.