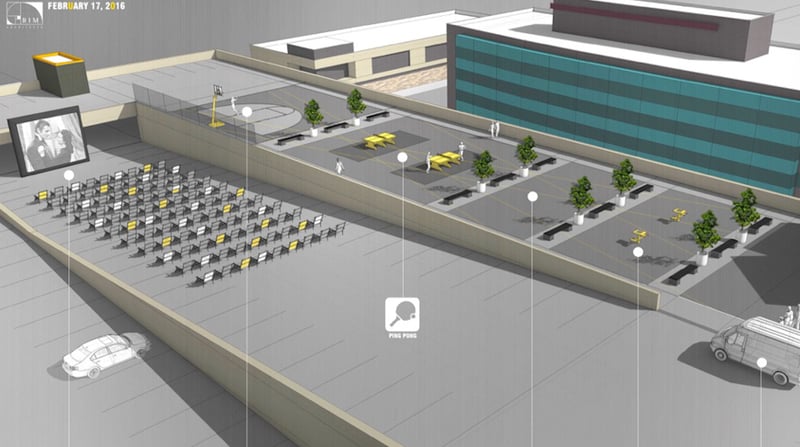 This summer, downtown dwellers and those just passing through can enjoy more than just the good views from atop the Fifth Avenue parking garage.

Anchorage is getting ready to roll out its first rooftop recreation spot, complete with a basketball court, at the corner of Fifth Avenue and B Street, on the deck of the EasyPark Alaska garage.

Urban communities in the Lower 48 have had success with the rooftop recreation model, which sparked the idea to try it in Anchorage, says Andrew Halcro, executive director for Anchorage Community Development Authority.

“They show movies and have concerts, some have farmer’s markets,” said Halcro of other cities’ parking garages. “And we felt we could do the same thing. And the space above the Fifth Avenue garage is unparalleled when it comes to not just the views but the sun it gets all hours of the day.”

Dubbed “The Rooftop,” the space opens to the public on June 1. On tap for this summer’s rollout is table tennis, chess and half-court basketball, with more recreation — movies, concerts, private events — planned for the future.

“We’d like to get to a point in time where we develop a cool urban dog park up there,” said Halcro. “We think that, you know, the folks that live and work and play downtown need choices, whether it’s to eat or to have recreational space.”

The Rooftop is another item on the list of revitalization steps for downtown Anchorage, which include a new food truck hub, K Street Eats, which opens May 2.

To keep the public safe from flying basketballs and ping pong paddles, the floor plan of The Rooftop will include screens and backstops — something Halcro promises won’t take away from the rooftop view.