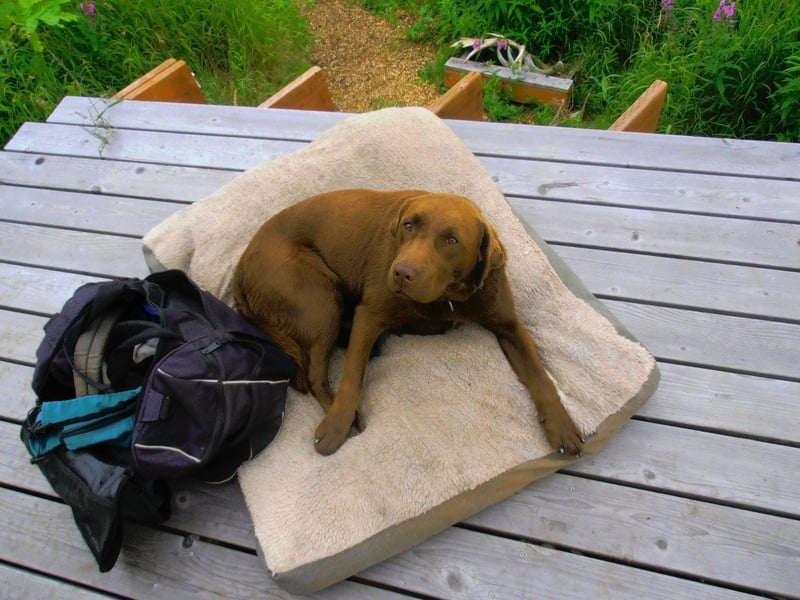 A 7-year-old chocolate lab, which lived in Anchorage’s Campbell Lake neighborhood, was shot to death last week after it aggressively approached a man and his child, the Anchorage Police Department said Tuesday.

The man who shot the dog told KTVA he was acting in defense, afraid the dog was about to attack his 3-year-old son. He also said he’s received death threats and is now afraid for his family’s safety because he’s been labeled as a dog killer.

In a release issued by APD late Tuesday morning, police said they were notified of the incident Thursday by a citizen who reported their neighbor’s dog, named Skhoop, had just been shot.

According to APD, the shooter’s truck was parked in the street in front of the property Skhoop lived at on the 3500 block of North Point Drive.

“According to the shooter, he was in the process of getting into his vehicle with his small child when the lab approached them in an aggressive manner,” APD wrote. “The man fired several shots at the dog which were fatal.”

After he fired the shots, the shooter drove off to take his son to school, he told KTVA. A witness to the shooting called police and gave them his license plate number.

APD said at the time of the shooting, the dog was not “visibly secured,” although its owners said it was secured by an electronic fence. KTVA reporters at the scene Tuesday did not see a visible sign indicating the electronic fence.

“We have an official report with animal control dated last year labeling this dog as a level one loose and aggressive dog,” said Anchorage police spokesperson Renee Oistad. “On the other hand we have an individual who fired a weapon in the Municipality of Anchorage. That is against the law, and police were not contacted when it happened.”

With the level one classification, Skhoop’s owners were required to restrain the dog, according to an official with Anchorage Animal Care and Control. What was not made immediately clear was whether the electronic fence met this requirement.

The man who shot the Brailey family dog was cooperative during the investigation, according to police. He also said he’d like to find a way to make amends with his new neighbors.

“I would like to try and figure out how to forgive each other,” he said.

But David Brailey said he’s not quite ready to move on following the death of his family’s pet.

“Do I have to move? Do I have to leave? Is that what this is? Because it’s ruining my life,” said Brailey.

No charges have been filed, and police said the case was being forwarded to the Municipal Prosecutor’s Office for further consideration.

Lauren Maxwell can be reached at lmaxwell@ktva.com.

The post Man accused of shooting dog in Anchorage neighborhood says he was protecting his son appeared first on KTVA 11.