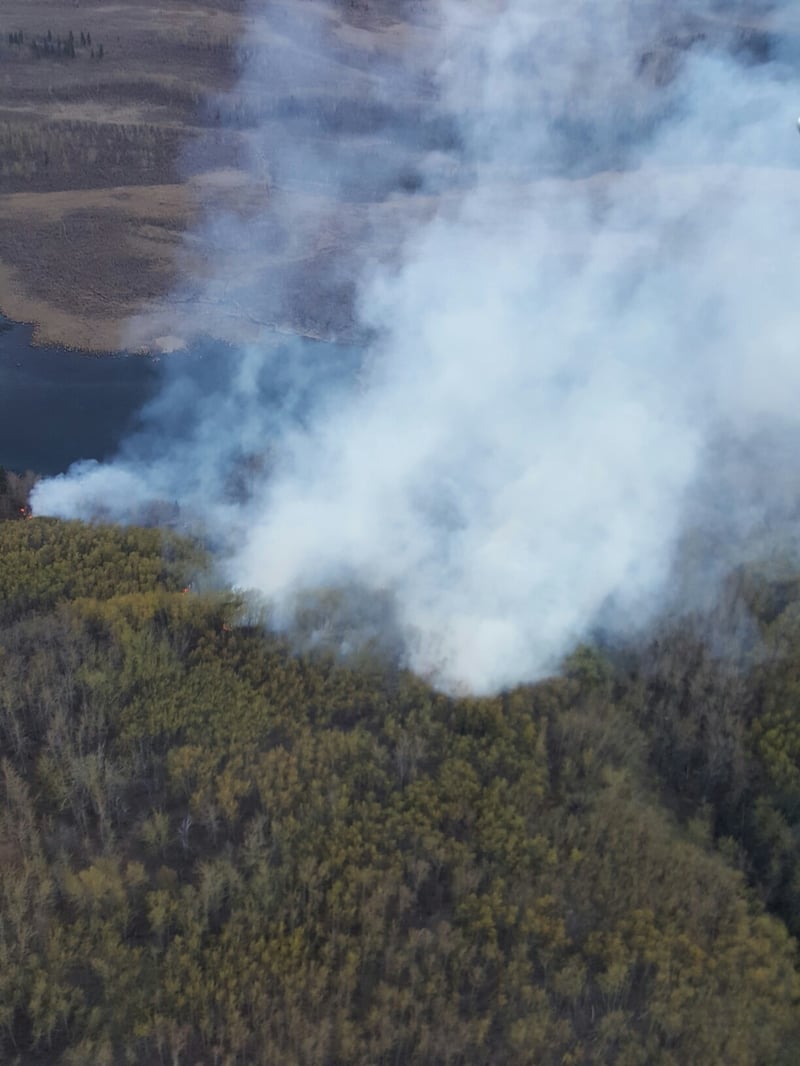 The Alaska Division of Forestry expects the Leaf Lake Fire, burning near the Knik River, will be 100 percent contained Tuesday – as longs as winds don’t become too forceful.

By late-morning the fire was 80 percent contained, the agency said.

A remote wildfire burning near the Knik River, outside of Palmer, that started late Saturday hadn’t grown by the time smokejumpers were able to get to the site to battle the flames Sunday. The initial estimate of the fire’s size was less than half of its actual size, according to Alaska Division of Forestry spokesperson Tim Mowry.

The human-caused fire, known as the Leaf Lake fire, was first reported at 5:35 p.m., according to Mowry. In an initial estimate of the fire size, produced by DOF, the agency said, the blaze was 10 acres, but DOF revised later revised that figure to 25 acres.

Mowry said the fire was burning along steep terrain that was edged in what he described as “swamp land,” preventing it from growing, and was roughly six miles from a trailhead on Maud Road. He noted that the wet terrain and lack of trail access also prevented firefighters from reaching the fire immediately.

“No flames are visible from the air, but the fire is putting up substantial smoke,” he added.

The crew of seven smokejumpers were dispatched from the Bureau of Land Management’s Alaska Fire Service in Fairbanks. They arrived shortly after 1 p.m., Mowry said.

Smokejumpers are the “elite” among firefighting personnel, he said, jumping from planes with only the equipment on their backs to fight wildfires in remote areas. Mowry said the team was prepared to create a fire line, a gap between the fire and fuel — trees, brush and other flammable materials.

“State Forestry firefighters were able to fly in via a contract helicopter to construct a helicopter landing zone and begin a structure defense plan for a cabin that is approximately 1 mile from the fire, in the event the fire begins moving in that direction,” Mowry added in a statement.

A statement from the division said the helicopter has “been dropping water on the fire most of the afternoon and that work has been effective in slowing growth of the fire, with the exception of occasional uphill runs on the slope it is burning on.”

Norm McDonald, also with DOF, said a helicopter had been dispatched to carry buckets of water over the fire, and would later be used to bring in more personnel to battle the blaze. A statement from the division said the helicopter has “been effective in slowing growth of the fire, with the exception of occasional uphill runs on the slope it is burning on.” A second helicopter will join the effort late Sunday.

“Fortunately there is a lake at the base of the slope the fire is burning on so it makes for quick turnaround time,” officials said. “Nothing eventful happened overnight [Sunday] and firefighters are working at continued containment today with more water drops from the two helicopters that are working on the fire.”

Pilots are being advised to stay out of the area while air operations are under way over the fire.

“We do have a temporary flight restriction over the fire area, so if pilots are flying through the Knik drainage — the glacier, flightseeing type stuff — just be advised the fire is in the north side of the Knik River, that is under that flight restriction and just to avoid the airspace,” McDonald said. “We’ve got a fixed-wing, a helicopter, both working in there, just provide them room to do their job.”