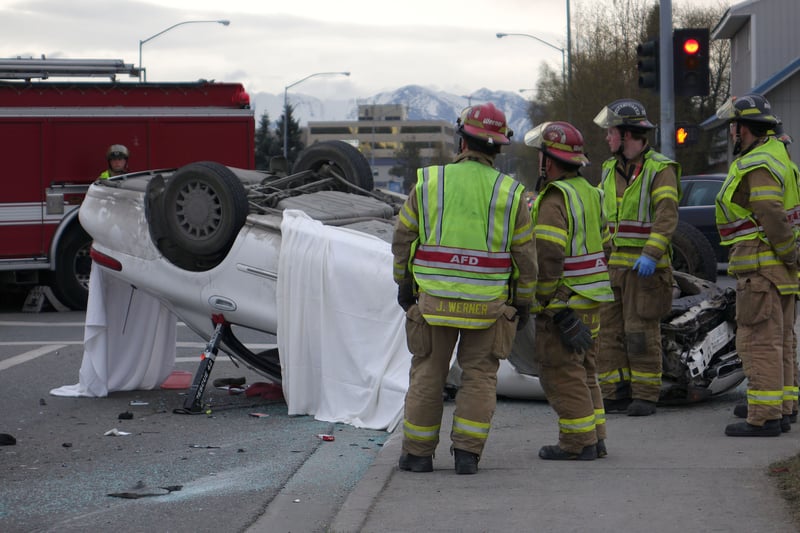 On Thursday, the Anchorage Police Department identified the person killed in the crash as 39-year-old Charles Martin. His next of kin has been notified.

Police have confirmed one person was killed in a collision involving at least four vehicles Wednesday morning at the intersection of Bragaw Street and Debarr Road.

Anchorage Police Department spokesperson Jennifer Castro said one person died as a result of the crash, but there were no other serious injuries. A release from APD stated the roads were closed but have both since reopened.

Bragaw has been reopened near Debarr following our investigation of a fatal collision. Thank you for your patience. https://t.co/Ua25qR6Je4

The crash was reported at 8:35 a.m. Wednesday, according to Castro. Anchorage police and fire crews responded to the scene of the crash, where one of the vehicles had rolled over and had one person trapped inside, according to a morning release from APD.

According to an afternoon statement from police, a man who was the driver and only person inside a white car that had rolled was pronounced dead at the scene. People in other vehicles involved in the crash were examined by medics, but reported no major injuries.

Anthony Degange, one of the drivers involved in the crash, said he and a group of people, at the request of an Anchorage police officer on scene, attempted to flip the overturned vehicle.

“He asked us to try and flip the car over, but we didn’t have enough people to get it over,” Degange said.

He said the driver in the overturned car did not have a pulse.

APD’s Major Collision Investigation Unit was at the scene investigating the crash. Preliminary reports state multiple vehicles headed south on Bragaw Street were stopped at a red light at the intersection of Debarr Road. The white car, traveling south on Bragaw, struck another sedan and hit two other vehicles before rolling and coming to a stop in the far right hand lane on Bragaw.

Police closed the southbound lanes of Bragaw Street just before Debarr Road for more than three hours. Traffic was diverted through the Costco parking lot, as well as down San Jeromino Drive.

APD’s release states the circumstances and cause of the initial crash are still being investigated. The medical examiner took custody of the man’s body at the scene. The driver will be identified once next of kin have been notified.

Correction: In an earlier version of this story, it was stated that the southbound lanes of Debarr Road were closed due to the crash. The information was according to a statement from APD. Debarr Road actually runs east and west, Bragaw Street runs north and south. This has since been corrected.