FRANKLYWNOW - Municipality continues to call for funding to improve Anchorage’ 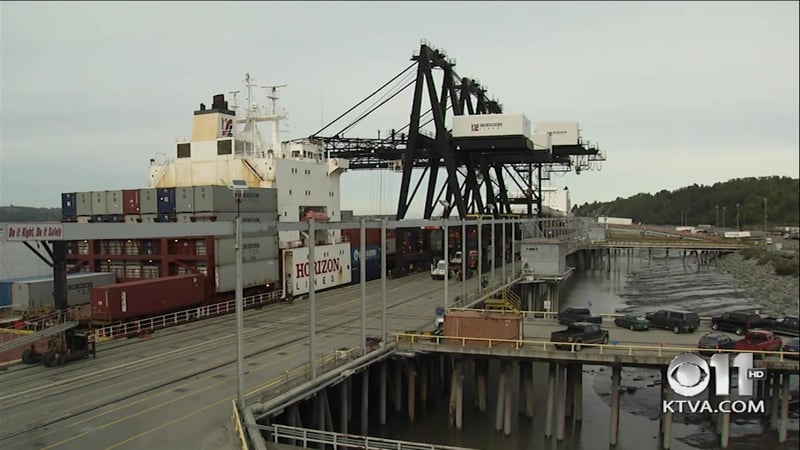 Aside from terminal additions in the 1970s, the Port of Anchorage has largely remained the same in the 54 years since the first dock was finished. A journey underneath the port — to both the terminals constructed in 1962 and the ‘70s — reveals the dilapidated state of the structure.

“In many cases, the welds start to fail,” said Todd Cowles, the port’s engineer, pointing out a corroded pile, or pillar, under the port. In some areas, the corroded steel can be scraped off with the swipe of a finger. “A significant earthquake, we expect, would cause damage down here.”

Protective steel “jackets” have been placed around the most corroded piles, but Cowles said they are only designed to last 15 to 20 years.

“It’s just not economical to keep Band-Aiding,” he said. “We’re never going to find the seismic capacity that structural design demands now with these jackets.”

The port already has $127 million secured for the first phase of their modernization project. The second phase requires an additional $290 million, all of which is being requested from the state. The director of the port, Steve Ribuffo, said the project would increase efficiency, not capacity, although expanding the port’s capacity would be easier after the modernization is complete.

“We’ve scaled the project down to something that we can make a good business case for [and] is large enough to support the size of the population now and into the future,” Ribuffo said.

Indeed, about half of the goods that arrive at the port go to places outside the Municipality of Anchorage, according to the Port of Anchorage’s website. Moreover, the site states at least 80 percent of all cargo imported to the state comes through Anchorage docks.

Berkowitz said the state’s infrastructure should be prepared for an economic boost once the fiscal crisis is over.

“If you don’t think that one day we’re going to solve this problem — and when that day comes, we need to be ready for the opportunities Alaska has — then you don’t really believe in Alaska,” the mayor said.

He said he was confident lawmakers in Juneau understand the city is asking for financing rather than a direct appropriation. However, Berkowitz did not specify when he believed the municipality would receive the funding it needs for phase two.

The first phase of the project is slated to begin during the construction season of 2017 or 2018.