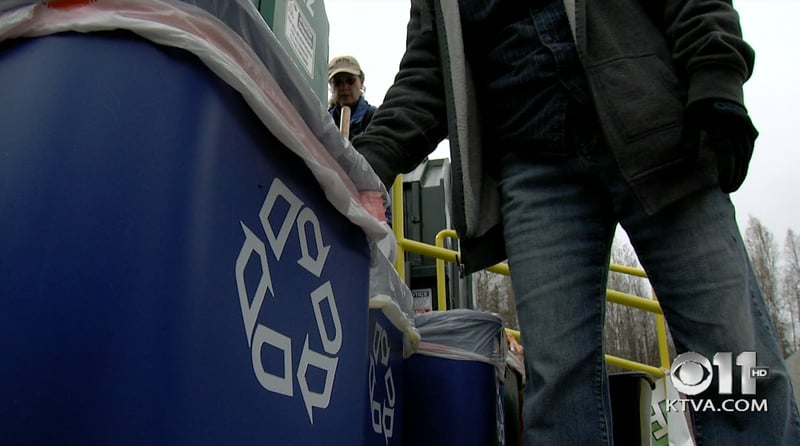 One Southcentral Alaska community is learning first hand what a big idea and some volunteers can do for a community, while working to send less trash to the Matanuska-Susitna Borough landfill by recycling locally first.

It might be a gravel lot filled with trash most days, but on the second Saturday and last Tuesday of the month, it transforms into the heart of the community as locals gather to drop off their recyclables.

“It’s also where old friends meet,” said Brenda McCain, a local recycler who said she tries to never miss a drop off day. “It’s just a no-brainer, it’s free, it is a little bit of work.”

It’s work that she and many others in the community don’t mind doing.

Virginia Richey has lived in Willow for nearly 60 years. She said there are many reasons she takes the time to sort her garbage, but she especially likes seeing the trash bill getting smaller.

“Everything we recycle here, we don’t have to pay to take to the dump for one reason, and another, it’s just good for the environment,” Richey said.

Recycling isn’t new, but two large recycling bins in Willow are. They cost over $10,000 a pop, but thanks to a couple of local grants, they’re able to take and sort more items.

“Our world is a mess and we need to improve,” said Linda VanWilinga, volunteer coordinator for Willow Recycling.

And cleaning up that mess is easier than ever before.

“Before we had to have somebody with a trailer, get the big bags from VCRS, fill those up and haul everything in ourselves, so this is a joy to be able to do this,” VanWilinga said.

“They added all the extra categories, you know, so I thought, ‘This isn’t going to work, it’s like a full time job.’ But now I’ve got it down into a system,” McCain said.

That second day means even more recycling and less trash coming from Willow. A project this community and the volunteers are proud of.

“We are getting a lot more households that are recycling and that’s exciting to me,” VanWilinga said.

“When I look at all of this stuff and think it could be used again, I feel really great about it, you know, it’s crazy that it was just going into the landfill,” McCain said.

The post Willow residents say recycling is good for the environment and the community appeared first on KTVA 11.