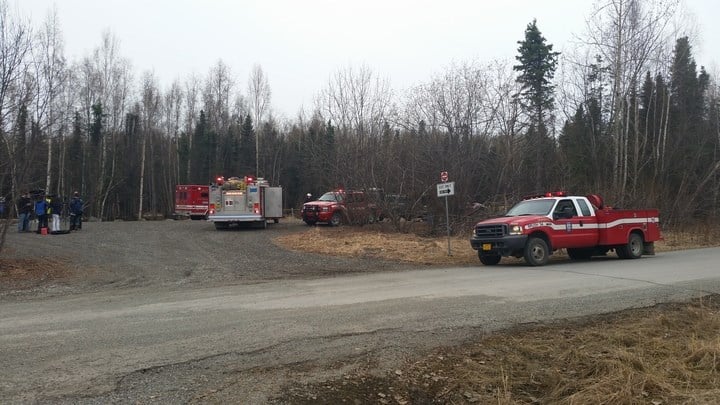 The National Transportation Safety Board (NTSB) released a preliminary report Wednesday of their findings in the investigation of a plane crash that killed four people near Chugiak on April 20.

The plane left the Birchwood Airport around 8:40 a.m., according to the NTSB, and the purpose was to perform aerial surveying and photography of the land adjacent to the airport. Around 9 a.m. on April 20, the Cessna 172 crashed about two miles southwest of the Birchwood Airport in Chugiak. The report states the plane was registered to the pilot, 64-yeard-old George Kobelnyk, and operated by 70 North LLC.

A damaged 100-foot tall spruce tree is believed to be the initial point of impact, judging by the fuselage and debris, the report states. Nearly 500 feet west of the tree, the main portion of the plane came to rest, leaving aluminum, door frame assembly and landing gear parts in its wake. A post-crash fire incinerated a majority of the airplane’s fuselage, according to the report.

During the 20 minutes the plane was in the air, it made several turns above the areas of Beach Lake, the Knik Arm shoreline and the airport, according to the NTSB report.

“The data track showed that the airplane proceeded southeast for about 1 mile at an altitude of about 1,100 feet msl before its last data position,” the report states.

Calm winds, overcast skies and a visibility of “9 statute miles” were reported at the time of the crash.

The results of a detailed examination will be released at a later date.