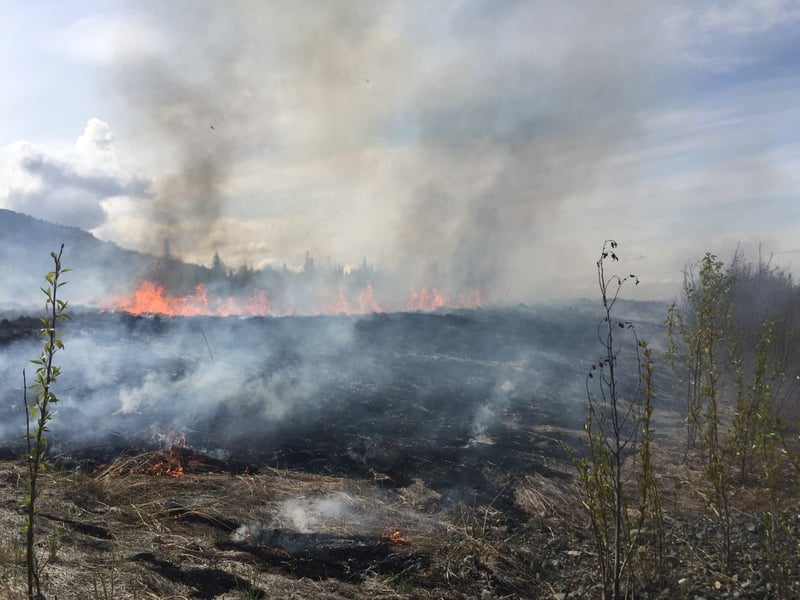 Nearly 2,000 acres of Joint Base Elmendorf-Richardson land will go up in flames this week – all to prevent a potential wildfire this summer. Fire crews started the controlled burn Monday, setting fire to live-fire ranges in the Arctic Valley area.

The ranges are like a tinderbox this time of year, full of dry grass and brush that acts like fuel.

Soldiers and airmen use the ranges for training year round. Their ordnance could start a fire.

“It’s the different types of munitions or pyrotechnics that they use,” Lambert explained. “If they’re using them in increased fire weather danger then there’s always potential for a start.”

The controlled burn will get rid of that potential fuel source. Using gravel roads and water, pumped from the creek, the firefighters can keep the flames where they want them. They’re using a mixture of gasoline and diesel to set the dry brush ablaze.

Better to do it when all the crews are there and ready to respond, rather than have it spark without warning, said Jonathan Glover, a Division of Forestry prescribed fire burn boss trainee.

“We have a large number of resources here so we can take care of all of these issues and burn off these large ranges,” he said.

The controlled fire is also good training. The different departments are getting the chance to work together and to brush up on their skills ahead of the real thing.

“We get to see those faces early in the season and work hand in hand with them and when we have a fire, we’re not unfamiliar with the agencies that we’re working with,” Lambert said.

Just how active of a wildfire season Alaska will have remains to be seen.

“It’s hard to predict so you never know if it’s going to be a wet or a dry season, but this spring has been abnormally dry, so we’re just trying to prepare for the worst and make for sure that we’re ready to go,” Glover said.

Crews will be burning on both sides of the Glenn Highway throughout the week and say Alaskans should expect smoky skies in the area.