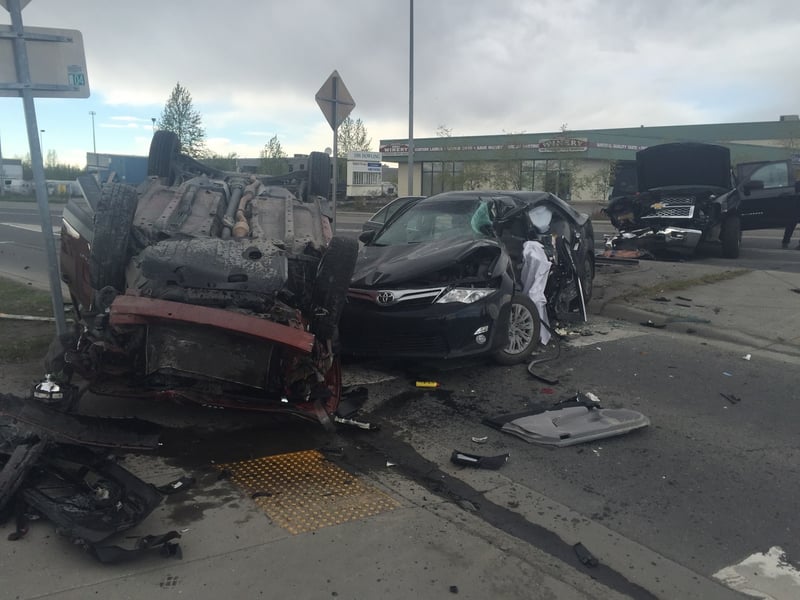 The Anchorage Police Department briefly closed Dowling Road in both directions between the New and Old Seward Highways following a multi-vehicle collision that seriously injured a female driver.

Three vehicles were involved in the crash, which occurred at 5:34 p.m. at the roundabout.

Police said an orange Jeep driving southbound was exiting the Seward Highway at a high speed and collided with a black truck.

“He took the Dowling exit at a high rate of speed, was unable to make the corner going into the roundabout, and went into the eastbound lanes of traffic,” said APD spokeswoman Renee Oistad in a statement. “The Jeep struck a black Chevy truck and then struck a black Toyota Camry.”

The Jeep flipped and slid “over the roof of the Camry,” according to Oistad. It landed upside down and the driver was uninjured.

Both occupants of the Camry were taken to a nearby hospital, and Oistad said the female driver had serious injuries as a result of the crash, but she was expected to live.

No one in the Chevrolet truck was injured.

Police have asked drivers to avoid the area while they are on scene. Only eastbound lanes of Dowling remained closed as of 7:30 p.m.