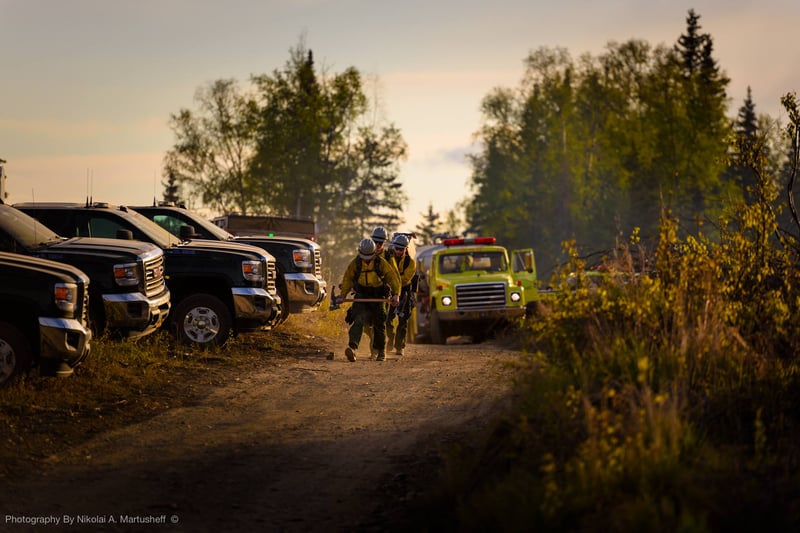 View of the Sunrise Fire from the air

Sunrise Fire from the air

Thursday afternoon, Division of Forestry spokesperson Tim Mowry said the blaze was 100 percent contained. He said about 30 firefighters were working to mop up the fire and extinguish hot spots.

Fire crews worked overnight to control the Sunrise Fire near Wasilla, keeping it to roughly 30 acres by Thursday morning, according to Tim Mowry, spokesperson with the Alaska Division of Forestry.

Mowry said more than 30 firefighters with the Division of Forestry were battling the fire overnight, along with assistance from local agencies.

Alaska has seen 98 wildfires, burning a total 403 acres, since the start of 2016. All but two of those fires have been human-caused, according to Mowry. The other two wildfires were caused by lightning strikes.

Crews determined Wednesday that the Sunrise Fire was human-caused and are investigating. No homes are currently threatened by the fire.

A grass fire near Wasilla was 90 percent contained by 9 p.m., according to fire officials at the scene. The fire was initially estimated to be roughly 15 acres in size Wednesday evening, but officials were later able to get a more accurate measurement, which showed the fire was roughly 30 acres.

The fire was located along a logging road at the end of Sunset Drive in Meadow Lakes, north of Pittman Road. It was first reported around 2:30 p.m., according to state officials.

Several cabins are located east of the fire but were not considered threatened by the blaze, according to Department of Forestry spokesman Norm McDonald. He said the fire was human caused and would be investigated.

Mat-Su Emergency Services Director Bill Gamble said at least one helicopter responded to help fight the blaze, along with other local fire crews. The Alaska Division of Forestry is in command of the fire, named the Sunrise Fire, and is also providing resources. Alaska Department of Resources spokesman Tim Mowry said an air tanker was being used to drop fire retardant on the area. A 16-person hot shot crew was also dispatched to the fire, according to McDonald.

“[We’re] hoping to catch this tonight,” Mowry said, emphasizing increasing efforts to control the fire quickly before it becomes a danger to nearby neighborhoods.

“We’re making good progress. We’ll have people on it throughout the night,” McDonald said.