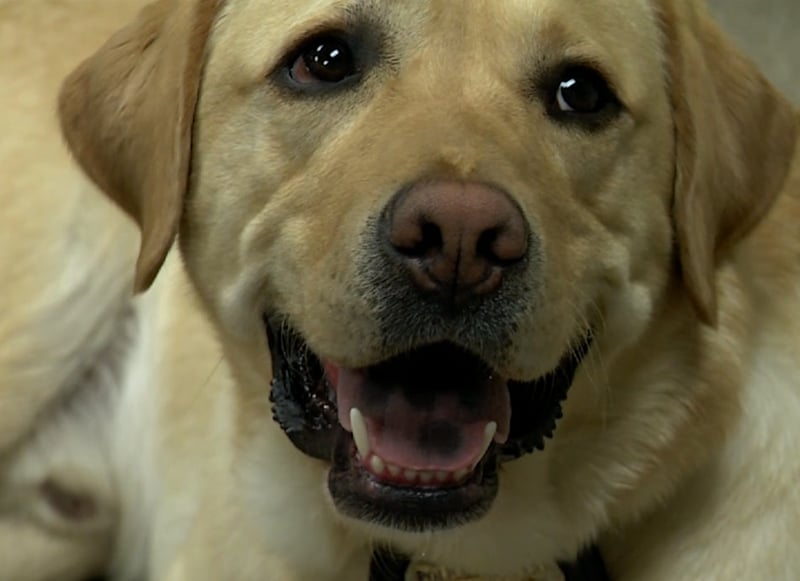 The Anchorage Police Department has a new investigative tool they think will make a big difference in finding evidence to convict people on charges like child pornography. That tool is Odin, a 2-year-old yellow lab who’s combating cyber crime with his nose.

He is one of only 10 dogs in the world specially trained to sniff out chemicals found in electronic storage devices such as USB flash drives, hard drives, and those easy to hide micro-SD cards.

Also known as Odie, he can search an entire room in minutes and will sit whenever he smells something suspicious.

“He is a food reward dog, which means I feed him upon him successfully finding the device and I have follow up commands for him to put his nose on the strongest scent that he can find,” explained Odie’s trainer, APD Sgt. Aaron Whitt, who also oversees APD’s cyber crime unit.

“Ultimately, what we really hope is that we would be able to put a stop to the active trading of that information or those images and ultimately be able to protect kids,” Whitt said.

After six weeks of extensive training in Connecticut, Odie can now be deployed on search warrants. In his first weeks on the job, he uncovered evidence that will be used for prosecution.

Odie’s sense of smell is more than 40 times greater than what humans possess. He’ll be able to find devices typically missed during regular searches. The starting costs for buying and training Odie were $2,300 and were paid for by federal grants. He’ll likely travel the state assisting other agencies and departments.

Odie was originally named Gleeson and raised in Chesterland, Ohio as part of the Guiding Eyes for the Blind training program for dogs. He was reassigned to ESD training because he had too much energy to be a guide dog. After completing his training, APD gave Gleeson the middle name Odin, and the nickname Odie.

According to APD, “Odin is the middle name of APD Officer Barry Odin Hetlet, who passed away last December after battling an aggressive form of cancer.”

Officials said Hetlet loved children and loved protecting them – “making Odin a perfect middle name for APD’s new resource that will help protect the children of our community and in our state.”