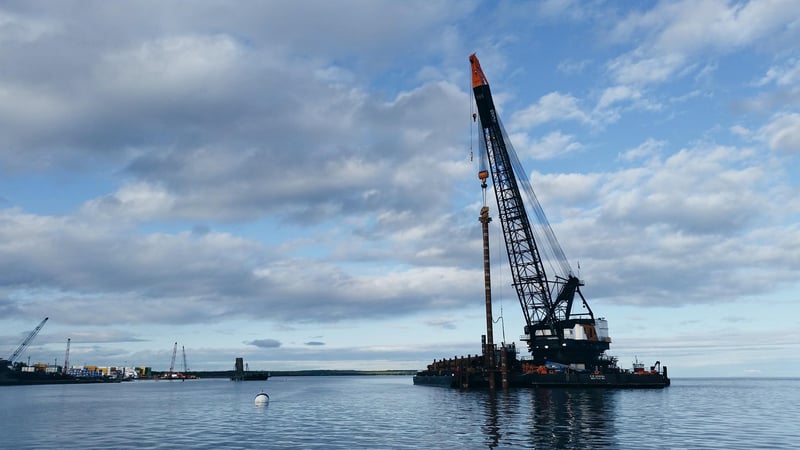 The biggest barge crane on the west coast is currently in Anchorage. It’s carrying ten steel piles, each 200 feet long, four feet in diameter and weighing more than 50 tons.

They’re slowly being hammered into Cook Inlet as part of the Port of Anchorage’s modernization project, which will replace deteriorating infrastructure.

“The question was asked, ‘What do you need to do to keep cargo moving across the dock for the state of Alaska for the next 75 years?’” said Lon Elledge, program manager for the Anchorage Port Modernization Project. “The Port has enough capacity for the people of Alaska. What it doesn’t have is reliable docks.”

The Port of Anchorage is spending roughly $10,000 an hour on the pile test project, with a total of $6 million budgeted.

The purpose of the testing is to see how much the piles can support, as well as the effect construction noise will have on underwater marine life.

“This can handle a high range of sound levels,” said Project Scientist James Reyff, referring to a hydrophone in his hands.

The underwater microphones are used to monitor sound around the barge. While crews work, marine biologists scan the area for wildlife.

“If we see a beluga, what we do is we stop,” Elledge said.

A large vibrating hammer is used to place the piles deep into the earth, and the sound generated comes with potential consequences.

“The sound can be of such an intensity that it could perhaps cause auditory damage, physical impact to an animal, as well as behavioral changes,” said senior marine mammal biologist Dana Seagars.

Cook Inlet beluga whales are endangered, and Seagars says there are fewer than 350 left.

“That number is declining and we don’t quite understand why, so its important to do this kind of stuff to provide that level of protection,” Seagars said.

Scientists are collecting data to find out how far the construction noise travels. The result will determine the fate of permits for the port’s future upgrades.

Crews are expected to place 10 piles into the ground during the current round of testing. It takes between two to three days to properly place each pile. If successful, some of the piles will be incorporated in the port’s expansion.

Upgrades to the land portion of the Port of Anchorage are expected to begin in 2017 while the additional piles and other water upgrades will begin in 2018.

By the time the project is complete, engineers expect to have placed about 1,000 piles.

The post At $10k an hour, crews begin placing test piles for Port of Anchorage upgrade appeared first on KTVA 11.