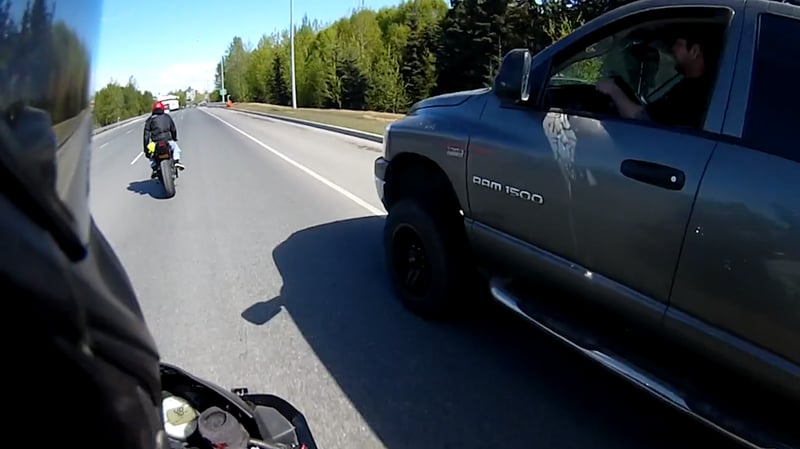 Videos from at least two helmet cameras show what police are calling a road rage incident between a pickup truck and a large group of motorcyclists headed to Saturday’s annual Bike Blessing in downtown Anchorage.

Adam Pierce and another rider recorded the incident and their videos have since sparked outrage on social media sites. In the videos, the truck can be seen making dangerous moves, sometimes coming very close to the nearly 100 motorcycles, and at other times leaving the main roadway to go around the group.

“I look back, and that’s when I see this truck just chasing him up the shoulder,” Pierce said. “He finally gets past us and that was pretty much the end of it, and then we looked farther forward. Our buddy Thomas is on his cruiser up in front of us, and this guy just gets up behind him and swerves and almost overcorrects and almost takes him out.”

Renee Oistad, a spokeswoman for the Anchorage Police Department, said the truck driver initially called them after the incident about a broken side mirror he claimed was damaged by the group, but they have not been able to get ahold of him since the videos were released. They stated none of the motorcyclists have contacted them about the truck. However, the videos have been viewed thousands of times and police said someone posted an address believed to be the home of the truck driver.

“We now have somebody who has taken it upon themselves to find an address that they believe this truck driver lives at and posted it online and have called for people to go to his home and retaliate,” Oistad said. “In this case, that address is wrong. Police have made contact with the individuals who live at that home and have confirmed the truck driver is not currently living there and hasn’t been at that address for several weeks. The people who do live at that house are completely uninvolved in the road rage incident and now fear for their own safety due to a situation they were not a part of.”

Oistad said police are urging the public to leave the homeowners alone.

“You’re taking a traffic violation and potentially changing it into a criminal act,” she said.

Pierce said “cooler heads did not prevail” in this situation, which he called potentially life threatening.

“It’s terrifying because if you’re driving in your car and somebody’s texting and then they rear end your car — ya, you’re gonna be a little upset and you’re gonna have to pay some money in damages,” he said. “But if you rear end one of us, it could be game over. We’re fathers, we’re sons, we’re daughters, you know, we’re somebody’s kids, we’re somone’s parents, and you could end us because you’re what, in a hurry? We were doing the speed limit.”

Some of the people who have commented on the videos have pointed out the motorcyclists’ reactions were also potentially dangerous. When asked about his thoughts on those comments, he said, “I’d say to a degree they’re right. We probably should’ve left the guy alone, but like I said, in that situation, where you can kill us easily, cooler heads don’t prevail.”

Police said they are at a “stand still” in their investigation of the incident as no one has come forward to file a police report. No one reported being injured during the incident.

Any drivers who see or are confronted by a dangerous driver are encouraged to call police at 786-8900 to report them as a REDDI (Report Every Dangerous Driver Immediately) vehicle.