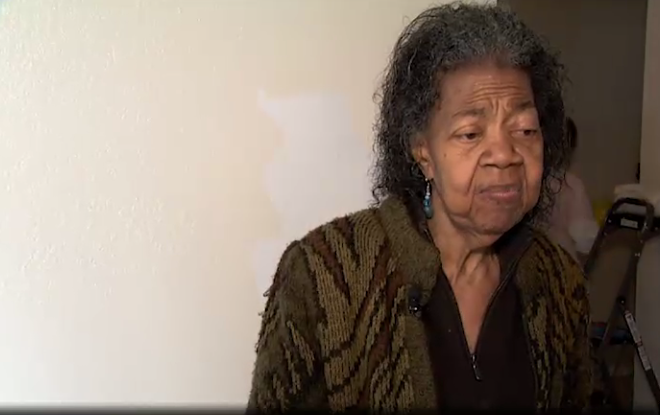 The home of Alice Lawrence is a landmark in the Mountain View neighborhood. Here, she’s known to most as Mother Lawrence. For more than five decades, she has provided food and clothing to anyone who needs it.

During the last several months, Lawrence has been struggling to keep up with utility and mortgage payments. Her home had fallen into a state of disrepair, and the pantry where she stores food to donate was unclean.

“We couldn’t afford to [renovate]. Money we got we had to give to other people,” Lawrence said during a visit to her home Thursday.

For the last few days, a team of more than 100 volunteers has been renovating the house. They replaced the floors, painted walls and cleaned from top to bottom. The effort was organized by real estate company Keller Williams, which encourages agents around the country to take a day to do a community service project together.

“We were so inspired by her history and all the work that she’s done in the community for the last 50 years,” said realtor Vanessa Noble. “We really wanted to help her leave a legacy that would outlive what she’s already done.”

Mother Lawrence spent Wednesday night in a hotel. When she returned Thursday morning, she was stunned by the transformation.

“Isn’t it beautiful?” said Lawrence, pointing to the new carpet in her bedroom.

She said people had never helped her in such a large way.

“It never happened before, and I want to thank everybody that’s helped me,” she said.

Lawrence added that the renovation will allow her to help more people in the future.

“I don’t want [anybody] to stop coming, because I will still feed them everyday. I don’t care who it is. At midnight, I’m here,” said Lawrence.

Keller Williams has set up a GoFundMe page to help Mother Lawrence pay for utilities and her mortgage. You can make a donation by clicking here.