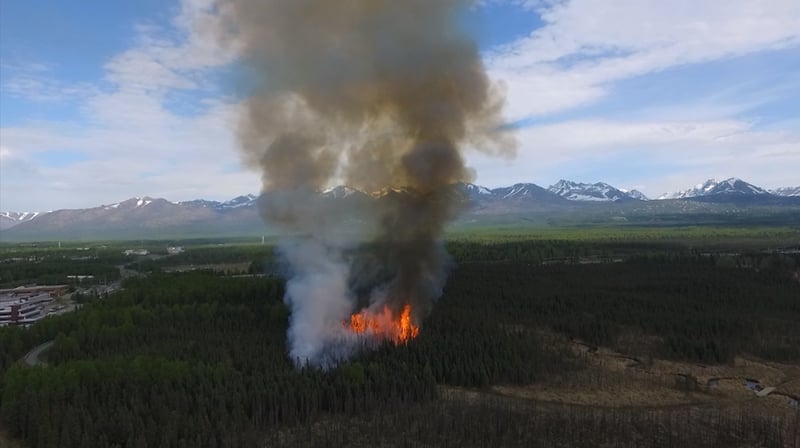 Inside the area affected by the fire

View of the fire from nearby Mt. Baldy

ANCHORAGE — Anchorage fire crews battled a brush fire in the Campbell Creek area Saturday evening while police waited to implement possible evacuations in a nearby neighborhood.

The fire, located near the intersection of Tudor Road and Elmore Road, was first reported around 5 p.m. and grew to roughly seven acres, according to Anchorage fire officials. Using a GPS tracking system, state fire officials later determine the fire was actually two acres in size.

“This was a very threatening fire,” said Anchorage fire spokesman John See. “We had one residence we were concerned about over off Madigan Circle and residences over there were quite concerned about it, actually were watering down their roofs and preparing for the fire.”

Nearly 20 units were dispatched to the scene from the Anchorage Fire Department and were supported by additional crews and a helicopter from the Alaska Division of Forestry, according to fire officials. The fire was contained around 6 p.m., DOF officials said.

“We ask that people and motorists avoid the area at this time as many crews and large first response vehicles are trying to access the fire from various points on Elmore Road,” police said in a statement, noting several drones were also being flown in the area. “First responders are asking those citizens to please not do that right now as it is interfering with their work at the scene.”

One Anchorage resident, who is a professional pilot and asked to remain anonymous, submitted the drone footage above. He said he stopped filming and landed his drone roughly 20 minutes before police issued their statement about drones in the area.

No injuries have been reported as a result of the fire. DOF officials are continuing to monitor the fire and will investigate the cause.