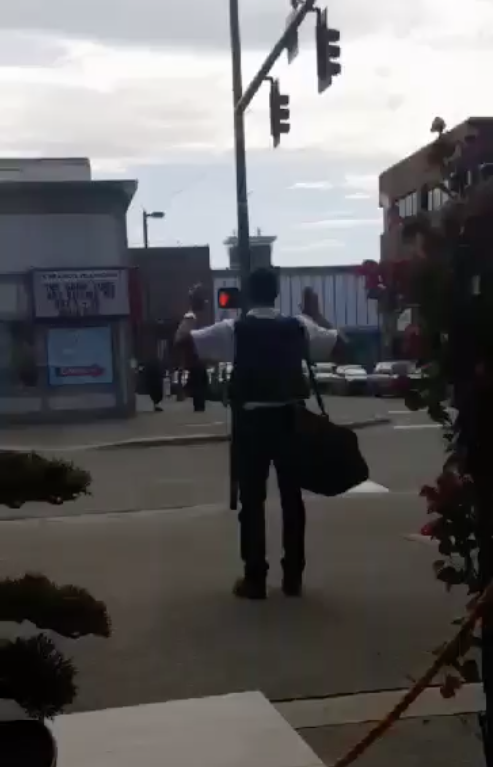 Police have stated no charges have been filed against a man seen on Fourth Avenue with a rifle, a ballistics vest and a black duffel bag Saturday afternoon.

Videos and images of the man being put in handcuffs circulated social media sites Saturday and Sunday.

Police spokeswoman Renee Oistad said the man was first reported when a witness spotted him entering a Yellow Cab at the Northway Mall at 2:22 p.m. A few minutes later, Yellow Cab dispatch called police, saying one of the cab drivers had “activated their emergency button but was not answering the radio.”

The cab was located at Fourth Avenue and E Street, according to Oistad. Police nearby responded to the intersection quickly and saw the man had already left the cab. The cab driver was not injured.

Oistad said police confronted the man, who complied with their orders. They frisked and disarmed him and went through the contents of his duffel bag at the scene. Oistad said they spoke with the man and determined he needed psychological help. Police transported him to a nearby hospital for evaluation.

No crimes were committed by the man and he “threatened no one,” Oistad said, so no charges were filed.

“He was initially put into cuffs for everyone’s safety. The cuffs were removed once the situation was stable,” she said. “It’s not uncommon for police to put people in cuffs for their safety and ours, and then cuffs can be removed once it’s been determined that either no charges will be filed or there is no longer a safety threat.”

His name will not be released unless he is charged with a crime.