FRANKLYWNOW - VIDEO: Man freed from vehicle just before it burst into flames

VIDEO: Man freed from vehicle just before it burst into flames 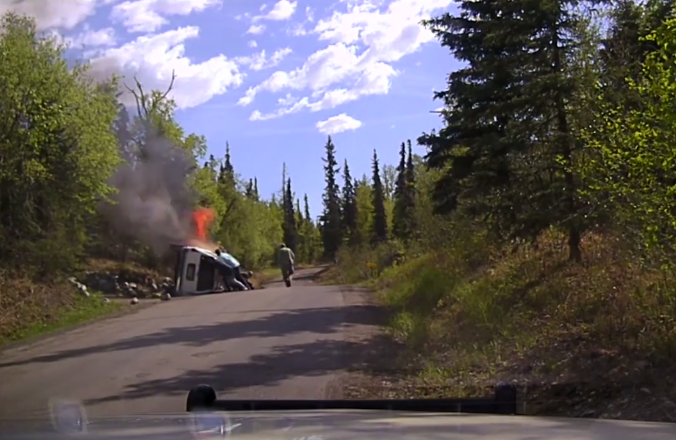 An Anchorage police officer and three good Samaritans freed a driver from his vehicle just before it became fully engulfed in flames Sunday afternoon.

The adult victim was not wearing a seatbelt when his vehicle rolled over an embankment on Middlerock Road, and he ended up on the passenger side of the vehicle with his arm “stuck under the vehicle,” according to police. A quick-thinking citizen broke the vehicle’s sunroof to help the victim get air inside the vehicle, the engine of which was on fire when police arrived around 4 p.m.

Officer Mitchel Veenstra and two other bystanders began rocking the vehicle in an attempt to free the victim. Unable to move it, Veenstra called out for more help and another person joined their efforts. The victim was finally unpinned and crawled out through the sunroof of his vehicle.

The man was taken to a local hospital for treatment of his injuries. Oistad said he suffered injuries to the arm that was pinned after the crash and was evaluated for possible smoke inhalation.

“The Anchorage Police Department is extremely grateful to the citizens who helped Officer Veenstra free the man from the car,” Oistad said in a statement. “Without their help, this incident could have easily turned into a fatality.”

Anchorage Fire Department personnel were able to extinguish the fire before it spread. The cause of the crash is still being investigated.

The post VIDEO: Man freed from vehicle just before it burst into flames appeared first on KTVA 11.