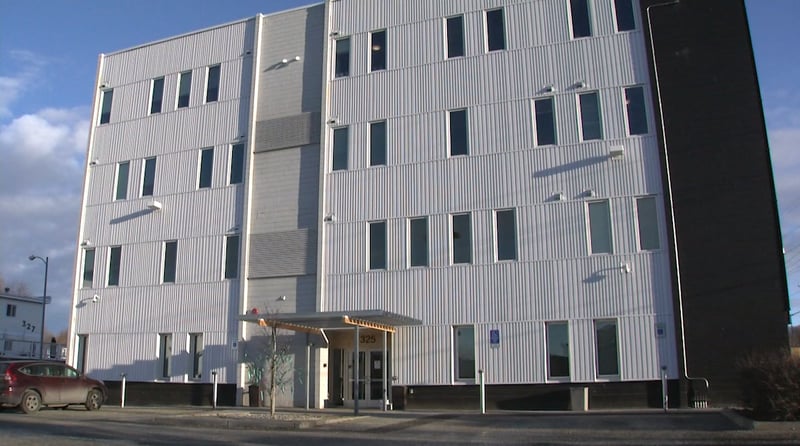 Some of Anchorage’s most vulnerable homeless people have a place to sleep now that the city’s newest supportive housing facility has opened at Third and Cordova Streets.

RurAL CAP’s Kenny Scollan said, like Karluk Manor, the new complex will allow people to drink in their rooms. He said the majority of residents will be people with mental health issues, and, like Karluk Manor, he’s convinced that calls for emergency services will go down once people have permanent housing.

“I mean the folks who live there averaged getting picked up by community service 100 times a year, and after living in Karluk Manor for six months, a year, they’ve reduced that to 10 or less,” Scollan explained. “They aren’t getting in trouble, they’re staying home, they have a place to live.”

One of the newest residents is Rose Stuart. Stuart moved in last week after living in shelters for two years. She said she lost her way after her husband died.

“After he died I just gave up everything, I went down the tubes,” Stuart said. “I was living with my daughter for a while but my drinking affected her so I moved out to Bean’s Cafe and they kept me going.”

Stuart said it’s been almost a year since she quit drinking and she was ready for a change. Still, she sometimes worries she may feel lonely living all by herself. She’s hoping to make new friends.

Right now Stuart is one of 11 residents at the new complex. Scollan said there is room for at least nine more.

Residents are expected to pay rent, Scollan explained — about 30 percent of their income. Scollan said that could be a social security check, a dividend from a native corporation, or a Permanent Fund Dividend check. He said the average is about $250 a month. The rest of the cost is covered by a grant from the Housing and Urban Development Agency.