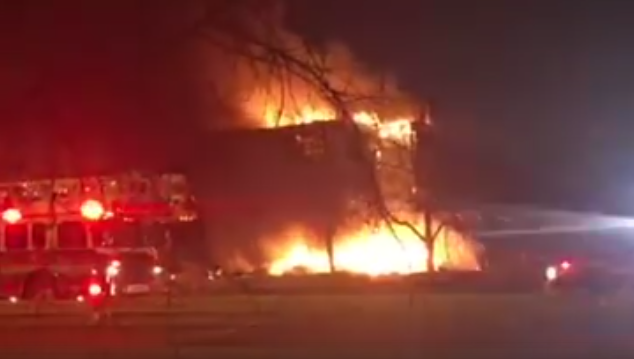 The second person killed in Wednesday’s fatal fire at the Royal Suite Lodge apartment building has been identified as 63-year-old Vivian Hall, according to a Friday release from Anchorage police.

The Anchorage Police Department says it has been unable to reach Hall’s family and is requesting assistance from the public.

“If anyone knows or has contact with the family of Vivian Hall it is requested they contact the Anchorage Police Department at 907-786-8900 or the State Medical Examiner’s Office at 907-334-2200,” APD wrote.

The Anchorage Fire Department is investigating a large structure fire that claimed at least two lives early Wednesday. The Anchorage Police Department identified one of the victims as 38-year-old Teuaililo G. Nua, who worked at the Cordova Center halfway house.

AFD spokeswoman Jodie Hettrick said the Bureau of Alcohol, Tobacco, Firearms and Explosives (ATF) has joined the investigation into the fire. Hettrick said based on reports from bystanders, there is a possibility the fire was intentionally set. ATF is helping AFD secure the scene for this investigation. At a meeting with some of the victims Wednesday night, AFD battalion chief Mike Davidson told them they would not be able to check on their apartments for at least a few days, as the building was considered a crime scene.

The fire was first reported at 2:30 a.m. Wednesday at the Royal Suite Lodge, according to a release from AFD, adding that they were on scene within three minutes. When they arrived, they made a request for more responders, as the building was estimated at 25 percent engulfed in flames, and within 10 minutes the complex was 50 percent involved. Thirty-four fire units were used.

By 5 a.m. the fire was under control, officials at the scene said. By late morning crews were still trying to put out hot spots.

The fire claimed multiple victims, including Nua. The other deceased person has not been publicly identified yet. In AFD’s release, they said 16 people were transported between four hospitals — Providence, Alaska Regional, the Alaska Native Medical Center and the 673rd Medical Group Hospital on JBER — but transported the most critically injured first. AFD said most patients were adults and in serious or stable condition. Four adults were listed in critical condition. Four children were also taken to local hospitals, and two were listed as being in critical condition.

AFD listed some of the injuries as burns, smoke inhalation, and traumatic injuries.

At 9 p.m. the ANMC released a statement saying three patients from the fire had been treated and released.

“The Fire Department is still clearing the building therefore the exact number of deceased will not be known until that task is completed,” Oistad wrote. “Some parts of the building are unstable making entry difficult.”

Nua’s body was taken to the Medical Examiner’s Office for an autopsy.

“Today was really difficult,” Hettrick said of the firefighting effort. “Fire fatalities are hard and the injuries that we saw, especially when kids are involved. That hits us really hard.”

Michael Brown has lived at the Royal Suite Lodge for about six months. His apartment is in the second building across from the one that caught fire. He said he originally thought the fire alarm was a joke, until he heard his dad yelling “fire.” Brown said flames had already engulfed part of the building and the car port by the time he made it outside.

“It was just like a tunnel, it just came all the way down the hallway,” Brown said, describing the way the flames shot down the third-floor corridor.

The fire blocked third-floor residents from going out their front doors, forcing some to jump out of their windows in the back.

Brown saw one of his neighbors knocking on doors and fighting the growing fire with just an extinguisher.

“He was spraying the fire with the fire extinguisher and I told him, ‘The fire is going to be coming this way, get out of there! Get out of there!’ And he ran away,” Brown recalled.

He’s convinced the fire was arson. Brown says crime and drug use has become a problem at the Royal Suite Lodge, and he saw two men fighting near where the fire started earlier in the night. He says he’s not sure he’ll feel safe in his apartment until he knows what really happened.

“The Royal Suite apartments – we’re a community here,” Brown said. “We don’t want this. We don’t want nothing like this to happen again.”

AFD has contacted the American Red Cross of Alaska, which has sent at least one representative to the scene to assist the victims who’ve been displaced by the fire, according to a fire dispatcher.

The owners of the Royal Suite Lodge have offered to cover the cost of housing the victims at a local hotel for a month. The Spenard Community Recreation Center has been turned into a temporary shelter for those victims, according to Hettrick. A Red Cross statement Wednesday evening said roughly 50 people were being helped at the shelter, and many of them had been transported to the shelter on a donated People Mover bus.

The Salvation Army Alaska is also assisting the victims by providing meals. Lunch on Tuesday was donated by the Tikahtnu Commons Red Robin, where the general manager, Toni Waddoups, says staff helped prepare and deliver 45 meals to the shelter.

“Within the next 48 hours the Red Cross will set up a disaster assistance center at Spenard Rec Center where we will work with Southcentral Foundation and the office of the Governor to assist homeless families in transition,” Red Cross spokeswoman Lisa Miller said in a statement. “Will help them through the recovery process, providing financial assistance for food, clothing and housing.”

While Miller said the Red Cross was not prepared to take in-kind donations, the Salvation Army Alaska is accepting donations of money and clothing, which a spokesman said should be dropped off at the organization’s Anchorage thrift stores. Those stores are located at 501 E Dimond Blvd and 300 W Northern Lights Blvd.

Some pets were also rescued and are being cared for at the Anchorage Animal Care and Control, according to Hettrick.

APD is assisting the fire department with the investigation. Oistad noted that “multiple people were transported to the hospital” before they were interviewed by law enforcement. APD is asking anyone who has been released from hospital care, but have not spoken to police, to call them as soon as possible.

This is a developing story; check back for updates. KTVA 11’s Eric Ruble, Bonney Bowman, Shannon Riddle, Megan Edge, Daniella Rivera and Shannon Ballard have contributed to this report.