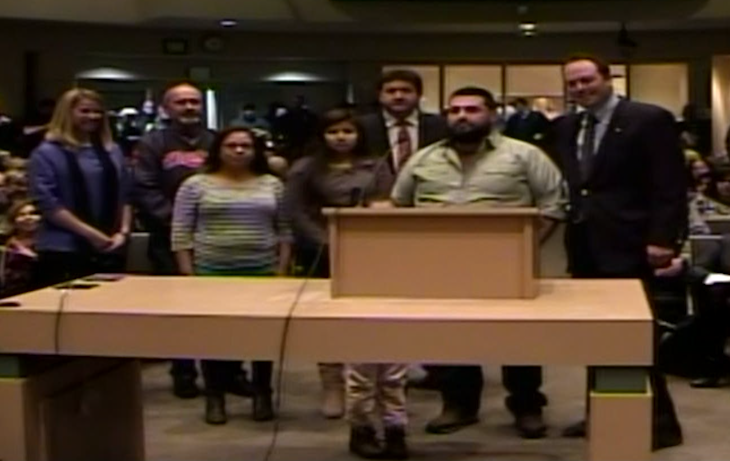 A man who, with the help of his daughters, cleaned graffiti from a historic Anchorage landmark was formally thanked by the Assembly Tuesday night.

The Assembly approved a resolution recognizing the work by Frank Perez and his two daughters. The resolution said the Perez family “took it upon themselves, selflessly and without any assistance” to clean the Delany Park Locomotive 556, which a crew found defaced with spray paint on March 21.

Once Assembly member Bill Evans finished reading the resolution at the meeting, he and nearly everyone else in the room stood and applauded the Perez family.

“It was a hard job,” said Perez’s 8-year-old daughter, who he had to hold up to the microphone at the meeting.

His other daughter also briefly spoke, thanking the Assembly for the recognition before Perez addressed the room.

“You know, here in Alaska, we live here, and we try to be good members of our community and you know, I’ve got these two young women that I’m trying to grow to be strong and independent and very powerful women, hopefully one day maybe she’ll be in your seat one day, Ms. Gray-Jackson,” he laughed. “And when we see things like the locomotive, I hope people take initiative and do something, not just for the city, but the state and for themselves and for their family.”

Police arrested 18-year-old Terrence John Keoni Vicens as a suspect in the case. He was charged with felony criminal mischief because of the extent of damage to the train, initially estimated to cost as much as $15,000 to correct, according to Anchorage park planner Maeve Lavtar. She explained that thousands of dollars had been put into a city effort a few years ago to make the train safe for the public.

But like Perez, other Anchorage residents stepped up to help restore the train, which has sat at the corner of Ninth Avenue and E Street for decades since the U.S. Army gifted it to the city in 1959. Mike Andersen, the owner of Dama Industrial, volunteered his company’s services to do restoration work and secured a donation of paint from an Anchorage paint store.

Video courtesy of the Municipality of Anchorage