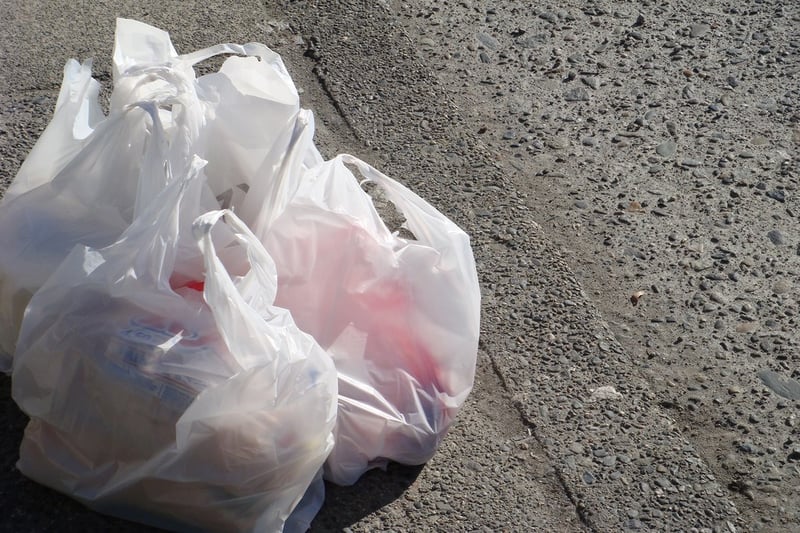 The hillside next to the Matanuska-Susitna Borough Central Landfill in Palmer has become a haven for bags: pieces of plastic buried under bushes or wrapped high around spruce tree limbs.

“They escape when they’re dumped from the trash can into the garbage truck because they’re so aerodynamic they catch every little bit of wind,” Carol Montgomery explained. “That’s why up in the trees you see little shreds of plastic everywhere and there’s no way to clean that up.”

Montgomery is part of the Mat-Su Bag It Committee, an effort of the Mat-Su Zero Waste Coalition. Their goal is to get people thinking about how their one-time use bag impacts our environment and wildlife. Montgomery said animals in the Valley have died after ingesting the plastic.

She said the smaller particles will ultimately end up in our food chain too.

“Plankton eat it, salmon eat plankton. Salmon are also attracted to the plastic because it grows algae, so they eat it as food,” she said. “So it comes back to us on our dinner plates.”

The plastic bags get blown out of the landfill despite staff’s best efforts to keep the trash contained.

“When the wind is blowing we’ll bring the fences in as close as we can so that anything that blows will get caught. So that’s our first line of defense for catching the bags,” said Butch Shapiro, the solid waste division manager.

Shapiro said he’s likely to see more garbage—especially plastic bags—diverted from the landfill. It not only saves space but also cuts costs.

“In about 162 years, the current way we’re doing things is how long this will last,” Shapiro said. “If you look at that in terms of dollars we will have spent $1.5 billion by the time this place gets ready to close.”

“To get two cans of soup from the store into your car, that bag is going to be with us for 2,000 years because it’s never going to break down,” she said.

The Mat-Su Borough is hosting a recycling conference on Saturday, April 15 to talk about ways to reduce waste going into the landfill. It will be at the Government Peak Chalet from 9 a.m. to 4 p.m.