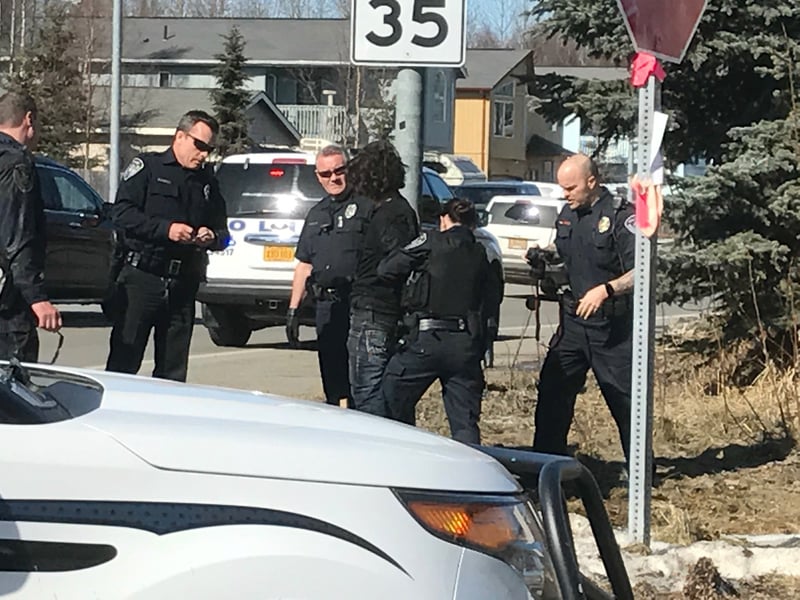 The juvenile passenger who fled from police was taken into custody

Police response in the Dimond area

Anchorage police asked the public to avoid the area of 80th Avenue and Northwood Street in the Dimond area because of an armed male Wednesday afternoon. Shortly after 3 p.m., they reported they had taken him and another person into custody.

Police dispatchers said someone called them regarding the suspect, who was initially described as a black male with dreadlocks, a red coat and camouflage pants. In an update, police said the description had changed and they were instead looking for a light skinned male of mixed race with bushy, shoulder length hair, wearing a gray hoodie, baggy black jeans and red boxers.

Sgt. Mike Kearle, a responding officer, said someone called police regarding a shooting near Dimond High School around 2 p.m. Officers spotted a vehicle matching the caller’s description and a passenger ran off. Police said the driver in the vehicle was taken into custody, and later to a hospital to be treated for an overdose.

“The 23-year-old male driver immediately shoved a bunch of drugs in his mouth and swallowed causing him to overdose,” Oistad confirmed in a statement.

The passenger, who Oistad said was a juvenile, was found in the area of 83rd Avenue and Northwood Street by officers. Following a brief struggle, he was taken into custody, but was not armed, according to Kearle. Kearle said it was possible the suspect dropped a weapon before he was found. Oistad said police had found evidence that at least one shot had been fired in the area of the reported shooting, but it wasn’t clear who fired a weapon.

Anchorage School District spokeswoman Heidi Embley said schools in the area were placed in stay put mode, including Dimond High School, Gladys Wood Elementary School, Sand Lake Elementary School and Chinook Elementary School. Stay put mode means students and staff are able to move around inside the school, but no one will be allowed to leave or enter the building until the order is lifted.

Just before 3:30 p.m., Embley said the stay put mode had been lifted from all of the schools.

This is a developing story; please check back for updates. KTVA 11’s Daniella Rivera, Shannon Riddle, Lauren Maxwell and Nick McDermott contributed to this report.