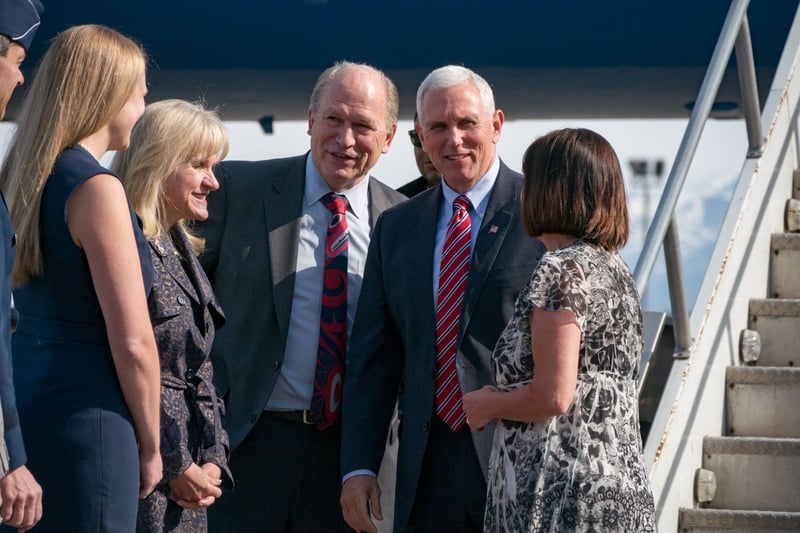 Gov. Bill Walker met with Vice President Mike Pence in Anchorage Saturday, the second presidential visit in as many weeks for Alaska.

Pence is on his way to South Korea, and made a refueling stop in Anchorage. The visit followed closely on the heels of a brief meeting with People Republic of China President Xi Jinping on April 7.

Walker and the vice president discussed a number of important issues to Alaska, including trade with Asia and the state’s natural resources, according to a statement from the governor’s office. Alaska Gasline Development Corporation President Keith Meyer was also invited to join in the discussion.

“Today I had the opportunity to meet with Vice President Pence and give him an update on our meeting with Chinese President Xi Jinping last week,” Walker said in his statement. “Alaska has significant trade relationships with countries like China, Korea, and Japan. This meeting was an opportunity to highlight the work Alaska is already doing in the Asia Pacific, and ways to further market our natural resources in the region. There is great potential in our oil and gas, fish, tourism, and mineral resource industries, and we look forward to working with the Trump Administration to maximize that potential.”

Before the meeting ended, Walker says he thanked Pence for the U.S. Army’s decision to keep the 4th Infantry Brigade Combat Team (Airborne), 25th Infantry Division, known as the 4-25, at Joint Base Elmendorf-Richardson. The two leaders discussed Alaska’s strategic location for military operations in the Asia Pacific, an aspect of Pence’s visit to South Korea. His visit to Seoul, South Korea’s capital, comes amidst threats from North Korea to engage in a pre-emptive nuclear strike.