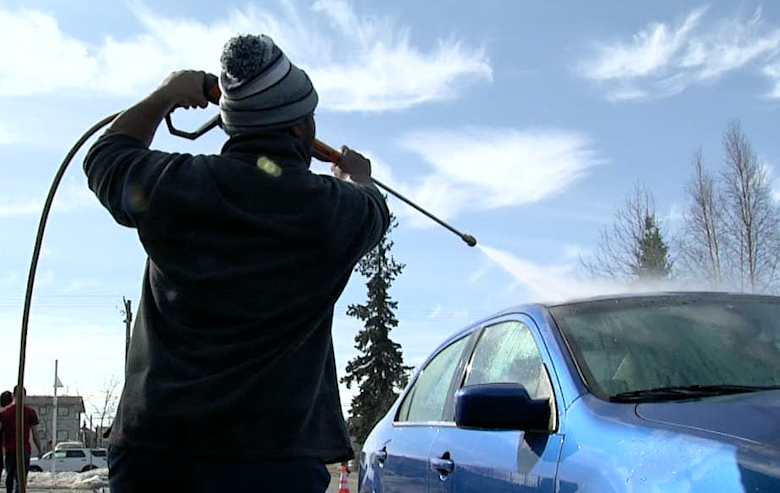 Dozens of vehicles lined Mountain View’s Price Street Saturday afternoon as they waited for a wash. A large group of volunteers washed vehicles outside the Mountain View Boys and Girls Club as part of a fundraising effort to help the family of Leroy Lawrence.

The East High School student was shot in the head on his 17th birthday on April 7. He died as a result of his injuries. During the seven-hour-long car wash, the line of vehicles never stopped, keeping volunteers busy throughout the day.

“It makes me feel good. I shed tears when I see people come and give their support,” said Carnard Davis, who helped organize the car wash.

Lawrence was an innocent bystander during the shooting, according to information from the Anchorage Police Department. Another male was shot in the leg, but is expected to survive. Lawrence’s parents said he left a lasting impression on everyone he met.

“All of the people out here… some of them don’t even know [Leroy],” said Eric Lawrence, Leroy Lawrence’s father. “But the people that he touched knew people and everybody wants to be here doing their part.”

One person who never knew Leroy Lawrence personally but felt compelled to help nonetheless is Heriberto Torres, who helped wash cars with his wife for most of the day Saturday.

The money raised at the car wash will help Leroy Lawrence’s parents pay for medical and funeral expenses. There was no mandatory minimum donation; organizers accepted whatever cash people could give. Leroy Lawrence’s mother, Angela Pointer, said the support eased the difficulty of the healing process.

“It makes us feel wonderful, actually,” she said. “It’s nice to have such a huge turnout.”

Pointer and Eric Lawrence described their son as an “unforgettable” person who could make anybody laugh. They said they don’t want any parent to go through what they are experiencing.

The couple said they hope young people learn from what happened to their son and choose to avoid violence.

“The main thing is to try to reach the next kid so that if someone says, ‘Yeah man, you drive, I’ll shoot,’ maybe that kid will say, ‘No, I ride with Leroy. I’m not doing that. We don’t roll that way,’” said Eric Lawrence.

The person who shot Leroy Lawrence and the other man is still at large. Anyone with information is asked to contact police at 907-786-8900. An anonymous tip can also be submitted through Crime Stoppers online or by calling 907-561-7867.

Leroy’s family has set up a GoFundMe page to help pay for medical and funeral expenses. It can be found by clicking here.