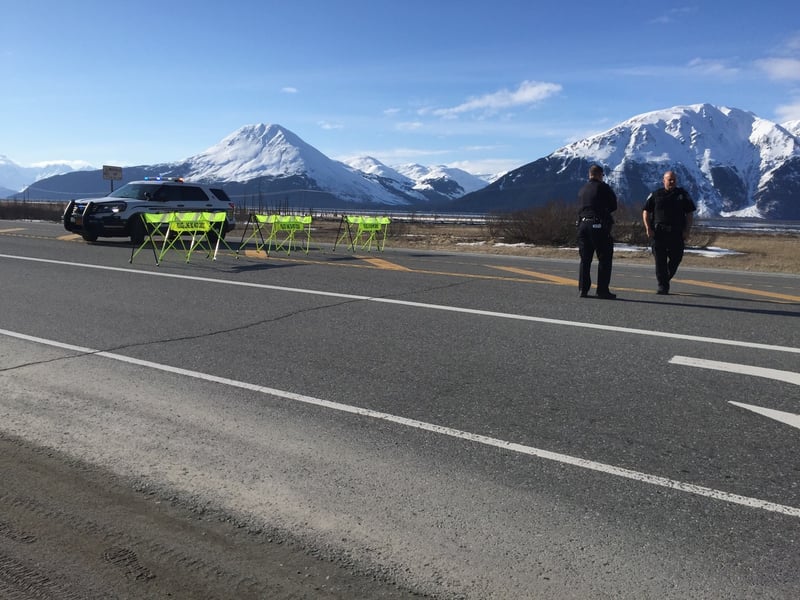 Alaska State Troopers have reopened the Seward Highway to traffic between Girdwood and Portage after responding to a man firing shots along the roadway.

A man with a gun with a handgun and a hammer was reportedly threatening people along the roadway, and authorities say he eventually fired shots.

One motorist held up by the road block was told by police that “a man was dancing in the road waving a gun.”

Alaska State Troopers say 37-year-old Nathaniel Smith, of Anchorage, wrecked his vehicle near milepost 76 and then fled into the woods. Multiple law enforcement agencies responded, including SERT personnel from Soldotna and Palmer, Alaska Wildlife Troopers, Anchorage and Whittier Police. A perimeter was established, and authorities eventually made contact with Smith by calling his mobile phone.

A perimeter was established, and authorities eventually made contact with Smith by calling his mobile phone. Smith became lost and wet after fleeing into the woods, troopers say, and was guided back to the roadway where he was taken into custody without further incident.

Smith was transported to a hospital in Anchorage to be evaluated related to wrecking his vehicle and exposure to cold temperatures. Upon his release from the hospital, he will be booked into the Anchorage Jail where he’s charged with four counts of assault in the third-degree, misconduct involving weapons– a class 4 felony, and reckless driving.

The Seward Highway reopened to traffic just before 11 a.m. Monday.

Authorities recently closed the Seward Highway for 12 hours overnight in response to an armed man at the Beluga Point parking lot.

Police identified Anchorage resident Kevin Thibodeau, 36, as the suspect in that incident. The road was eventually reopened on the morning of April 6, but police were unable to locate Thibodeau.

On Monday, April 10, a body was discovered in the water near Beluga Point. Authorities later positively identified that body as Thibodeau.