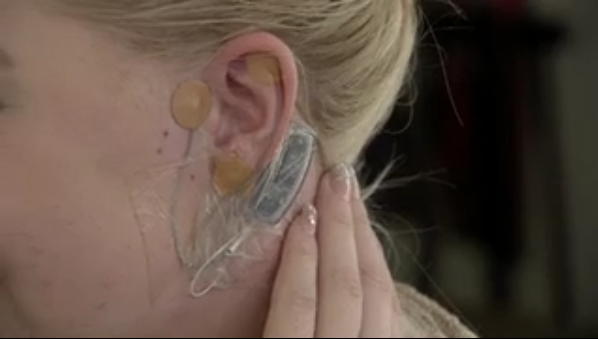 A group in the Mat-Su is trying a new approach to helping people get off drugs like heroin and other opioids.

The device is called the Bridge, and it’s designed to help curb the pain that addicts feel when they are going through withdrawal.

The Mat-Su Health Foundation is funding a study to see how well the device works. The study, which has been nicknamed “the Lazarus Project” will collect data that could be sent to the Food and Drug Administration which has yet to approve the Bridge to treat opioid withdrawal. Mat-Su Health Foundation paid for 25 of the devices at roughly $550 a piece.

The device itself looks a little like a hearing aid. It works by sending electrical signals to the brain that can help block the pain and other symptoms that are felt during withdrawal. It’s worn for just five days, according to Ginger Curet, a medical assistant at the clinic where patients are fitted with the device.

“I’ve seen everything from a patient coming in with a seven out of 10 pain level to a zero out of 10 in 20 minutes,” said Curet. “[They’re] feeling better and suddenly feeling hungry and they’re not sweating anymore. [It’s] watching their symptoms go from ‘I’m really miserable to this is really tolerable.”

Serena Espinoza is a board member of Fallen Up Ministries, which is working to match up volunteers who wish to try the device. She said the study is open to Mat-Su residents who are trying to get off heroin or other fast-acting opioids. But the commitment involves more than just a five-day trial with the Bridge.

Participants who are selected must also agree to receive at least six months of Vivitrol, a drug that blocks the user from getting high. She said people who are interested in learning more about the project can call 815-7283 (815-SAVE).