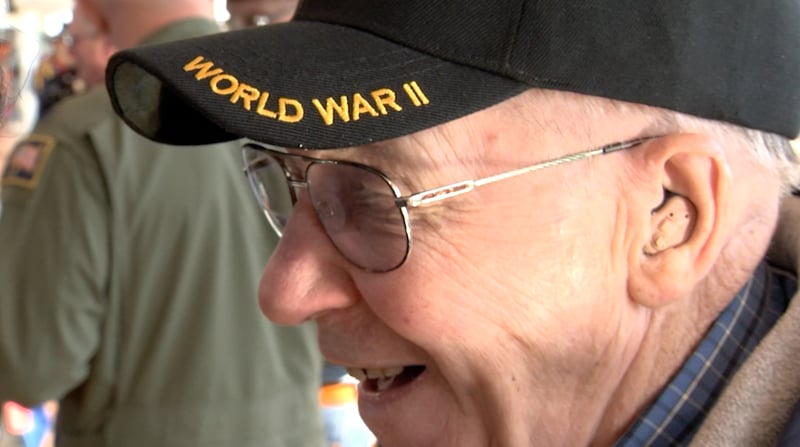 Nearly everyone who met Bob Smay on the way to his flight Tuesday morning was greeted with “God bless you.”

Smay was one of 22 veterans aboard Tuesday’s Honor Flight departure. The men and women, who served in World War II, the Korean War and the Vietnam War, are headed to Washington, D.C. where they will tour the memorials built in their honor.

It could be described as the trip of a lifetime for Smay, who sailed many seas as a gunner in the U.S. Navy.

“When I got on the first ship, I saved it,” recalled the 90-year-old of his time in the military. “You ever see one of them big bombs, great big bombs with the things sticking on ’em? One of them was out there, we were going right for it.”

He actually gives full credit to “the man upstairs,” for saving his life. But after that, Bob notes he never had any more close calls on the water.

In 1960, the WWII veteran moved to Alaska to start a church, where he took up fishing “everything from whales to the little trout.” More than 50 years later, Smay still loves a good view of the ocean. It’s something he says he’s hoping to see on the flight to D.C., his sense of humor ever-evident in his response to what makes this trip so significant.

“I’ll have to wait ’til I go through it, then I can tell you,” he said with a laugh.

Handshakes with other veterans mark Bob’s time in the airport Tuesday morning. It’s the first time he’s meeting most of them, but they all have something in common: they fought for freedom.

And as sure as that star-spangled banner yet waves, Bob gets his fair share of attention through the terminal. Total strangers receive waves and hugs as his son, Al Smay, pushes his wheelchair to the gate.

“You should’ve been a politician,” Al says to his father.

But it’s the genuine smile behind the greetings that differentiates Bob from the usual party line navigators. Because if living through a war taught him anything, Bob says it taught him to be kind.

“When you see a lot of people die– it’s nothing to see,” says Bob. “I learned it pays to be a friend to everybody and to help anybody that needs my help.”

To repay that kindness, Bob and his fellow veterans received an honorable sendoff: a number of patriotic ballads sung by Alaska Airlines employee Denise Snow.

“God Bless America” was among Bob’s favorite selections. And, after the last lyric was sung, he gave Snow a salute from his heart.

“Thank you very much,” he yelled from the crowd.

The Honor Flight veterans will return to Alaska on Saturday, April 22, at 12:30 p.m. The public is welcome to attend their homecoming at the Anchorage airport.