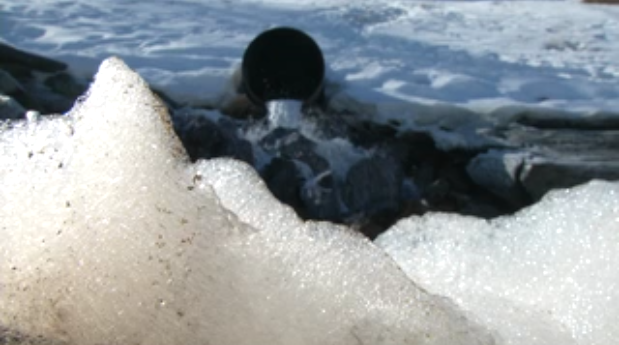 The Alaska Department of Environmental Conservation is looking into the make-up of a foamy substance that is being discharged from a pipe that runs into Cook Inlet at Airport Park along the Tony Knowles Coastal Trail.

The water is runoff from Ted Stevens International Airport, according to airport Environmental Manager Scott Lytle. He said it’s a mixture of snowmelt, sand and chemicals.

Lytle said the foam indicates the presence of glycol, the major chemical that is used in de-icing fluid for aircraft. The fluid accumulates in the snow at the airport all winter long. The airport does some filtering of the water once the snow starts to melt but Lytle said some chemicals end up in the storm drain and eventually the inlet.

The Department of Environmental Conservation sets limits for how much glycol can go into the water. William Ashton, a wetlands specialist, said glycol can change the oxygen levels in water which is bad for fish and plant life. He said the airport may not be violating

William Ashton, a wetlands specialist, said glycol can change the oxygen levels in water, which is bad for fish and plant life. He said the airport may not be violating

He said the airport may not be violating its environmental permit but it routinely exceeds benchmarks for chemicals it is supposed to meet. He’s waiting for samples to return from a lab to see exactly what is going into the water now.

Lytle said the airport is working to reduce the amount of de-icing chemicals that are used.

In August, tenants at the airport will be required to switch over to new de-icing machinery which should impact the amount of glycol that’s needed and the amount of run-off produced. But, he added that glycol will always be a necessary chemical.

“You need the glycol to keep the aircraft flying and the public safe,” said Lytle.

He called trying to do that as well as minimize the discharge a “balancing act.”

The DEC is in the process of writing a new environmental permit for the airport, which Ashton said will spell out more clearly what discharge is allowed as well as the penalties for violations.