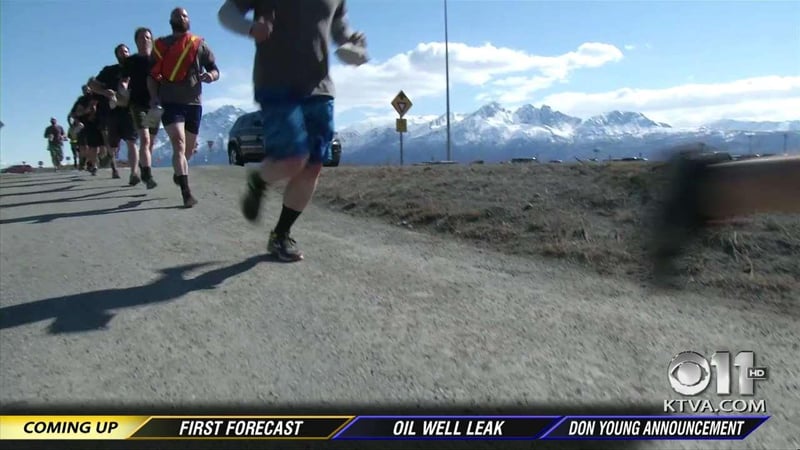 Firefighters in the Mat-Su Valley are in the middle of an intensive two-week training.

Member of the Pioneer Peak Interagency Hotshot Crew learn the basics in the classroom before trying out their skills in the field.

On Thursday afternoon, the crew put its newest firefighters to the test with the “rookie run.” It’s an eight- to 10-mile run on the frontage roads in Palmer while crew leaders pepper the six rookies with questions about their training.

“Pushing each and every one of us to our breaking point to make sure we can still function at that point, because a lot of times on the fire line, we end up there because we’re tired– we’ve been working for 21 straight days, 16 hours a day and we’re trying to avoid dangerous situations,” superintendent Kris Baumgartner explained.

Rookies say the training also provides a critical bond they’ll need to get through the seasons.

“For crew cohesion, this is where we lay the foundation of coming together as a crew and sets the tone of how things are going to go for the year,” Lucas Schlemme said.

Baumgartner said pre-season preparation is crucial, especially when it comes to fighting fires in the Valley. The Pioneer Peak team was the first on the scene of the 2015 Sockeye Fire that burned 7,000 acres and destroyed 55 homes.

“We could end our training here in the next two weeks and the first thing we do is respond to something like the Sockeye fire. That’s what we’re built for, that’s what the Pioneer Peak Hotshots are here for,” he said.

The training continues through next week when the crew will be out in the field. After that, they’ll help with prescribed burns on JBER to get some extra practice before the season starts.