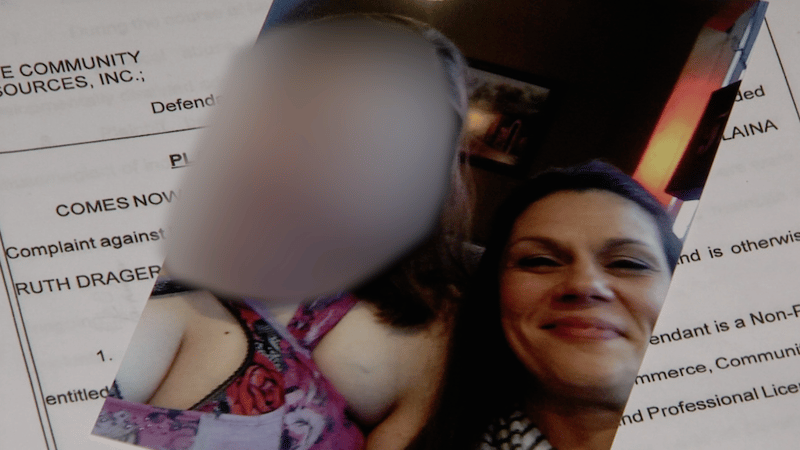 Elana Drager spends most of her time as a hair stylist, but a deeper passion was revealed almost 15 years ago when her grandfather needed help.

“He was living in a care home, and I witnessed just some things where he was neglected and abused, essentially just not cared for properly,” said Drager. “And it just sparked something in me like, this is not OK. And I wanted to make a difference.”

Elana Drager and her grandfather

So she became a caregiver, starting her career as a bath aid in 2002. Fourteen years later, Drager took a job at Hope Community Resources, Inc., a nonprofit organization that helps people with intellectual and developmental disabilities.

“When I started, it was just like immediately the ladies clicked with me, at least the two that I worked with,” said Drager, who worked at one of Hope’s assisted living homes in Anchorage, called Colonial House.

The women Drager worked with at the home had developmental disabilities, but some of the women were in their 20s and 30s, which she says gave her hope for their future.

“I fell in love with working in that environment and seeing progress. Because it’s different than caregiving for elders, because they’re kind of going the opposite direction and you’re helping them to the end of their life,” she said. “Versus these people, I mean it’s amazing, they’re like children in the sense of they can really, they’re capable of doing anything.”

The offenses she says she witnessed include one woman “left in her room, laying on her bed with urine and blood no sheets for days at a time,” according to a court document Drager filled out. She says she also reported “staff putting bleach in her bath” and leaving “urine soaked clothes in her room,” which are also listed in the court document.

“When I was employed by Hope Community Resources Inc. I reported it internally over 20 times…” Drager wrote. “Then I resigned because of retaliation.”

That alleged retaliation led Drager to file a lawsuit against Hope. Her days since resigning in December 2016 include sifting through a binder filled with files, forms and photos she’s compiled to make her case against her former employer.

Elana Drager poses with the woman she used to care for.

In an email, Hope Community Resources senior deputy director Mike Zechman says the organization is unable to comment “on anything related to ongoing litigation,” included the accusations of abuse and neglect at Colonial House.

“However, I can say that there is a robust system that protects individuals with developmental disabilities, both within Hope Community Resources and throughout the State of Alaska,” Zechman wrote:

Hope focuses on the multi-disciplinary team approach for each individual we support. This allows the individual, their chosen advocates, and the professionals related to their care to have a regular opportunity to thoroughly review all aspects of the supports they receive and to voice concerns. Additionally, Hope has an open door policy for all employees, telephone and email hotlines for reporting concerns, grievance procedures for both employees and support recipients, and an incident report process.

Drager is currently petitioning to be the official guardian for one of the women she cared for at Colonial House. She’s also calling herself an advocate for some of Alaska’s most vulnerable adults, sending “hundreds of emails” to alert anyone who will listen — her state and congressional delegation, even the governor — to her cause.

Drager is trying to get legislation created that would mandate a position similar to Alaska’s long-term care ombudsman — which advocates for the rights of the state’s elderly. That advocate, however, would be employed by the respective care provider agencies and would provide oversight and protective monitoring.

Another entity looking out for Alaska’s vulnerable adults is the public guardian section of the Alaska Office of Public Advocacy.

“When you are appointed as the guardian for an individual, it is the equivalent of the court saying, ‘You are essentially their parent, and you have all the responsibilities and duties that a parent does to their minor child,'” explained Elizabeth Russo, the supervising attorney for the public guardian section.

There are currently 16 guardians caring for more than 1,576 people across Alaska.

“Our caseloads are among the highest in the country,” said Russo. “We’re currently at close to 100 cases per public guardian.”

Russo says there’s a constant fear that one of those 100 people might slip through the cracks. But, she adds, they’re doing the best they can with what they have “trying to help people who are part of our society and who are often forgotten and they shouldn’t be.”

The guardians’ heavy caseload stresses why another advocate source is needed, says Drager. The woman Drager used to care for at Colonial House currently has a state-appointed guardian. Russo would not comment on Drager or her petition for guardianship.

Drager says she wants to be the woman’s guardian, because when it comes to some of the alleged offenses she witnessed during her employment, “you barely would let a dog live like that, better yet a human being.”

“The ones that I’m talking about, they can’t advocate for themselves,” said Drager. “They need somebody to say, ‘This is what she wants, this is what she’s saying she wants. And she has that right.'”

She says even if she can’t help all of Alaska’s most vulnerable adults immediately, she can at least fight for one of them in the meantime.