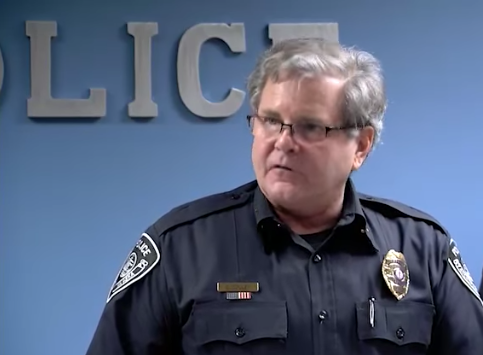 After less than two years on the job, Anchorage Police Chief Chris Tolley is retiring. The announcement was made Monday afternoon during a press conference at Anchorage Police Department (APD) headquarters.

Tolley was sworn in as chief in October 2015, replacing Mark Mew, a 30-year veteran of APD who spent over five years as chief of police.

Prior to taking the lead role at APD, Tolley spent 30 years with the Baltimore Police Department and the Drug Enforcement Agency.

In 2015, Tolley was tasked with “moving the police department forward,” as mayor Ethan Berkowitz said at the time.

While the department has made pushes during Tolley’s time to hire more officers and increase neighborhood foot patrols, Anchorage saw its deadliest year in 2016, with a record 30 homicides.

Tolley will be replaced by Capt. Justin Doll, who has been with Anchorage Police since 1996.

“Chris Tolley has led the way rebuilding APD. I thank him and his family for strengthening Anchorage. Captain Doll’s knowledge of the department and city will lead a rebuilt APD to a higher level of service,” Mayor Ethan Berkowitz said Monday. “Chief Tolley had delayed his retirement in order to become police chief. Captain Doll took that time to get ready and understand what it would take to be a chief, and, we’ve hit the point where he’s ready to step into command and Chief Tolley can take a well-deserved retirement.”

During his tenure with APD, Doll has served as a patrol officer, field training officer, SWAT team member, bomb technician and most recently as commander of the homicide and robbery/assault detective units, according to a press release from APD.

“I was really happy to have Chief Tolley’s leadership for a period in time, I thought it was very healthy for the department to have somebody from the outside for awhile and bring in some new ideas, and with that being said, I think we’re now poised to have somebody that’s come up from within the ranks and really understands the nuts and bolts of the police department,” said one of Captain Doll’s colleagues on his promotion to chief.

Earlier this year, APD announced it was instituting a three-point plan to deal with an increase in homicides, property crime and vehicle thefts:

Though he did not comment directly on APD’s three-prong plan in Spenard, Fairview and Mountain View, Captain Doll said, “Once we get closer to that transition point, we’ll definitely be talking to the community about that as well, letting residents know what we intend to do. But I definitely want a chance to sit down and talk about it with the command staff first.”

The change of command ceremony will take place on June 30.