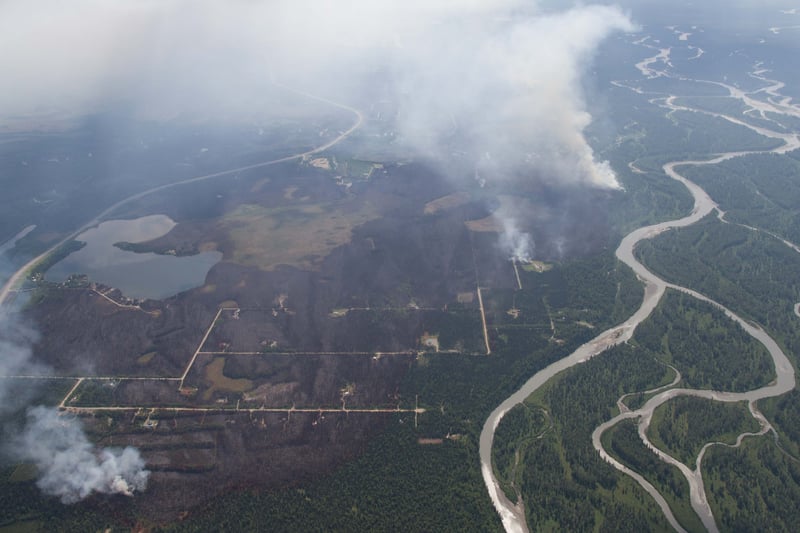 Memories of the 2015 Sockeye Fire were reignited Thursday, five days into the state’s case against the Anchorage couple accused of starting the destructive blaze — Greg Imig and Amy DeWitt.

In recorded interviews, Imig repeatedly told fire investigators there was no way the more than 7,000 acre wildfire could have started on his property, but state fire investigator Ethan Eley says he’s certain it did.

Eley was the only witness to take the stand on Thursday at the Palmer courthouse.

He told the jury it was his job to try to determine the source and origin of the fire. Eley conducted several interview with Imig and DeWitt in the days immediately after the fire.

The couple now faces 12 charges each related to starting the Sockeye Fire.

The prosecution asked Eley about dozens of photos he took while on Imig’s Willow property off Ringler Circle. The state was specifically interested in photos of a small burn pile, covered by five planks of wood, the location where Eley believes the fire started.

“All the indicators directly indicate that the fire came out of there, crept out of there and went south,” Eley told the jury.

But in every recorded interview played for the Jury on Thursday, Imig says he and DeWitt are not responsible for starting the fire, despite illegally burning without a permit on the property that same weekend.

In a recorded interview played for the jury you can hear a state fire investigator tell Imig that their findings in the field are conclusive and that the fire definitely started on Imig’s property from a burn pile that wasn’t properly extinguished.

“Gentlemen you are wrong,” Imig responded. “I was there god dang it. I’ve been doing this for 15 or 20 years. I wasn’t lackadaisical. I know it did not creep from either of our burn piles, I can promise you that.”

Imig also told investigators that when he first saw the fire it hadn’t reached his property yet and was coming from the West.

But the state says it has all the proof needed to make its case against Imig and DeWitt.

When asked what his expert option was on what started the Sockeye Fire, Eley did not hesitate to respond.

“A non-extinguished, unattended burn pile off the west of Mr. Imig’s property,” Eley told the court.

Before court let out for the day, the defense began their questioning of investigator Eley. They argued that he did not follow wildfire investigation guidelines and raised questions about the accuracy of his report.

Eley will be the first to take the stand Friday morning.