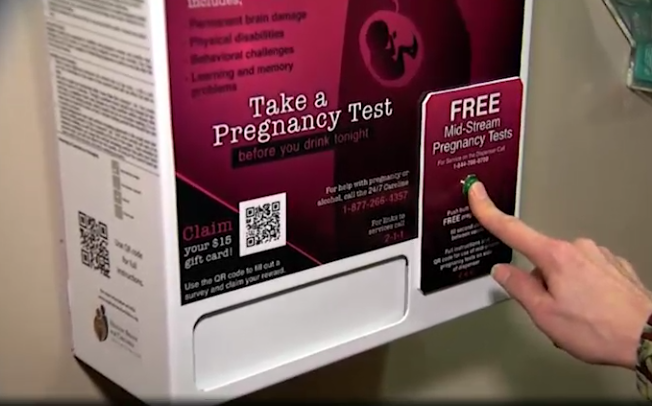 It was a controversial study when Fairbanks Senator Pete Kelly proposed it two years ago. Now the results of putting state-funded pregnancy tests in bar restrooms is out.

Researchers from the University of Alaska Anchorage (UAA) Institute for Circumpolar Health Studies conducted the $400,000 study, which aimed to see whether easy access to pregnancy tests in bars would encourage women to stop drinking if they found out they out were pregnant. Researchers wanted to show whether the approach would be an effective way to cut down on Alaska’s high rate of Fetal Alcohol Spectrum Disorders (FASD).

The dispensers included information on drinking and pregnancy. The study also asked women to take a survey with a small gift card as incentive, as well as a follow up survey six months later. UAA’s Ryan Ray, who helped design the survey, listed some highlights.

“When forty-two woman alone found out they were pregnant from a pregnancy test in a bar where they went planning to consume alcohol, that’s a big deal,” said Ray.

Driscoll said women cited barriers like cost and, in rural Alaska, privacy when it came to getting tested early in their pregnancies.

Driscoll said the dispensers have been taken down for now but he’d like to see them go up again. He’s hoping federal funding may pay to do a larger study state-wide.

Correction: A previous version of this story incorrectly stated who proposed the study. It has been amended.