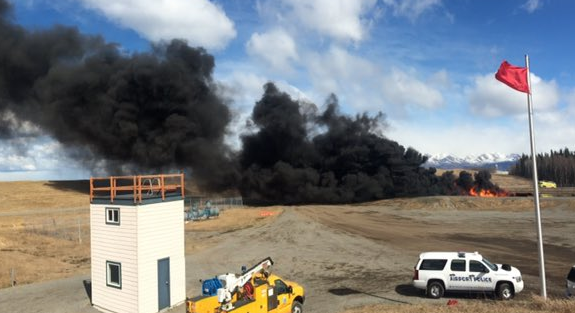 Massive plumes of smoke from the Ted Stevens Anchorage International Airport could be seen all over town Wednesday– it’s only a training exercise for the Airport Fire Department.

Firefighters filled a pit with 250 gallons of fuel then lit it on fire, creating a towering funnel of black smoke that drifted across the runways.

“It’s a small fire. If we had a real aircraft incident we’d have much more fuel and fire to deal with, so it’s fairly small,” said Harry Crippen, the assistant chief of training.

Two-dozen firefighters– including five new recruits– spent their day off preparing for a real-life emergency.

“It’s incredibly important. It’s hands-on, being familiar with the apparatus, the equipment,” said Ross Stratton, who’s been with the department for six weeks. “Also teamwork, getting out there and knowing if I deploy a hose line, how to move with my team, how to appropriately use the tactics in real life situations.”

Time lapse of the Anchorage Airport Fire Department’s training this afternoon. Remember…do NOT call 911. It’s only a drill! pic.twitter.com/RIx68KtMUp

Anchorage has the fourth busiest cargo airport in the world. Stratton said with so many aircraft going in and out every day it’s crucial firefighters be prepared for “when” something happens, not “if” something happens.

“It takes your training to a much more serious level that this will happen and I know I’ll respond in this way,” Stratton said.

The training continues Thursday afternoon. Firefighters remind people not to call 911 if they see the smoke.