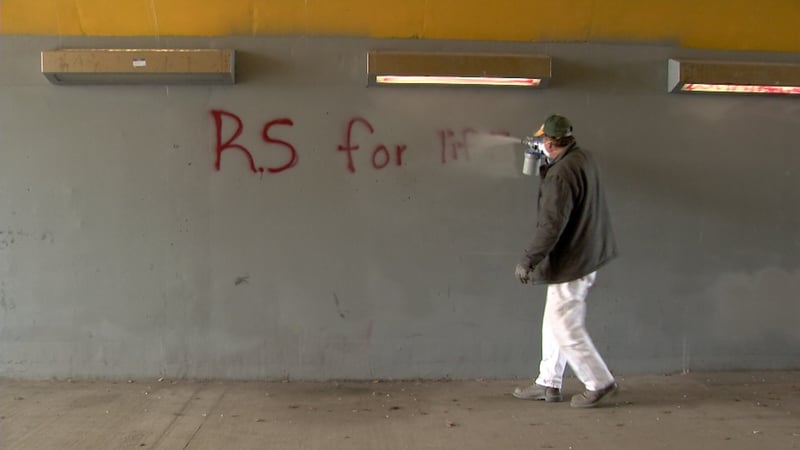 Grass starting to green-up in Anchorage and a few flowers are in bloom, but graffiti is starting to show up in earnest as well.

Municipal maintenance director Alan Czajkowski said graffiti is a year-round problem that gets worse in spring and much worse in the summer. And, he said, crews are already on it.

“Right now the list is growing, said Czajkowski, adding that it can be hard to keep up with graffiti calls. “A lot of times we go clean something up and two days later it’s tagged again.”

Most of the graffiti cleanup work goes to just one man: Doug Ellison. He’s the muni’s only full time graffiti buster, a job he’s been doing for 20 years.

“It kinda gets me disgusted sometimes,” Ellison said, after discovering a wall he’d covered the day before had been tagged overnight. “But, it’s part of the job.”

Czajkowski said the Anchorage spends between $7,500 to $100,000 every year cleaning up graffiti. According to police, the penalties are similar to a fine for littering — $75. But the culprits aren’t easy to catch.

People who spot graffiti in public places can call the city’s graffiti buster hot line at 907-343-GONE (4663). Czajkowski said crews will get to it as soon as possible and prioritize graffiti that is particularly vulgar.

The Municipality of Anchorage will only deal with graffiti left on muni property, not private property.

Mystrom stopped by KTVA to discuss the program and its impact on the community.