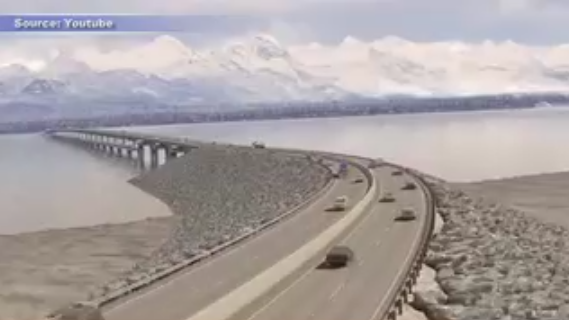 Governor Bill Walker is closing out the Knik Arm Bridge and Toll Authority (KABATA) project, after more than a decade of work and millions of dollars in state money.

The Department of Transportation is wrapping up one last piece at the federal level, dealing with right-of-way matters, according to an email from the department’s legislative liaison Mike Lesmann.

“Once these matters are resolved, Central Region will begin closing the project out with the FHWA [U.S. Federal Highway Administration],” Lesmann wrote in the email to Anchorage Senator Tom Begich (D) last month.

Begich, who represents the Government Hill neighborhood in Anchorage, made the announcement at a Community Council meeting soon after.

The Department estimates the closure of the project could happen within the month and will free up about $40 million in earmarked federal funds to be used for other projects. According to Grace Jang, a spokesperson for Walker, the governor would like to have the federal funds reallocated to transportation projects that will benefit Mat-Su residents commuting to and from Anchorage.

Begich has also made a few suggestions for improvements in Anchorage, such as building up access to the Port of Anchorage and increasing pedestrian space on the Government Hill Bridge.

After years of controversy, Begich says his constituents are excited about the KABATA closure.

“I’m happy about it and frankly Alaska should be, the day of the megaprojects is over,” said Begich in an interview last week. “The Knik Arm Bridge project would have been significantly disruptive to downtown Anchorage, midtown Anchorage, it wouldn’t have been necessarily a benefit to the Anchorage area, and, in fact, could have lowered property values.”

Work on the project won’t be completely erased. For now, it will be shelved.

“The materials, engineering and analysis are preserved so that this administration or a future administration could pursue the project should the state’s fiscal situation improve or priorities change to favor the construction of the bridge,” DOT spokesperson, Shannon McCarthy, told KTVA in an email.

Mat-Su Senator Shelley Hughes (R-Palmer) says her constituents still hold out hope that someday the project can be brought back to life.

“We can’t really swing doing that project right now, but in my area, it’s really important,” said Hughes. “It is not a bridge to nowhere, there are many people living over on that side. There’s tremendous industrial potential, commercial development over on that side, on the Mat-Su side, that would be actually beneficial to Anchorage.”

Since the toll authority was created in 2003, the state has spent about $10 million on the project, according to McCarthy. That’s on top of $76 million from the federal government. Overall, KABATA is a nearly one $1 billion project.

According to McCarthy, the state has until 2031 to start construction on the bridge before it is required to reimburse federal funds used to purchase the right-of-way.