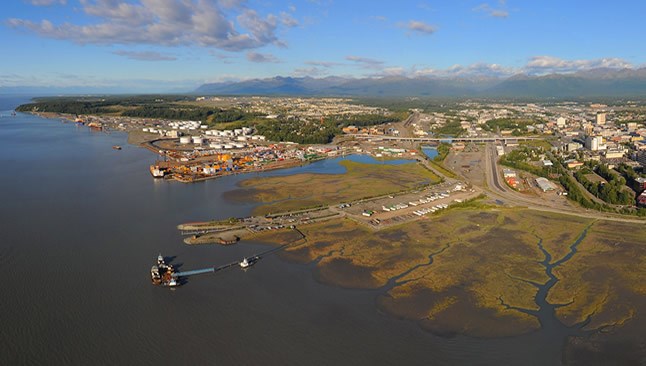 Anchorage Economic Development Director Chris Schutte says an ordinance that deals with hazardous materials at the Port of Anchorage needs changes, but Government Hill residents say that could put them at risk.

Anchorage Assembly members are being asked to change Title 21, the new Anchorage land use and zoning laws that were at least seven years in the making.

Schutte said city planners were surprised to discover the new laws require a 1,000 foot buffer between new hazardous material storage areas and residential neighborhoods like Government Hill. That, he said, is holding up development of several new jet fuel storage tanks the city would like to construct at the port.

“What that means for the port is anytime they need to do any updates or renovations to infrastructure they are going to get dinged with this,” said Schutte, referring to the new requirement. “And anytime they want to bring in a new fuel tenet for example like a new Crowley, or any sort of new fuel storage, they wouldn’t be allowed to do it within the thousand foot buffer without going through a variance process.”

The city is asking Assembly Members to strike the buffer zone at tonight’s meeting as well as another new rule that would require a public hearing before any new development at the Port.

A handful of Government Hill residents showed up to testify against making changes to the current regulations. They know they’re already at risk should an accident happen at the Port, and don’t want to up their chances by adding more tank farms.

“Nobody seems to be concerned with looking at the other side of the coin, which is the safety of government hill,” said one resident. “Science, math, and rigorous Muni sponsored hazard studies proved 15 years ago that a zone of fatalities actually does exist in the neighborhood.”

While a representative for Tesoro, Kate Blair, spoke out against the current regulations, saying they will delay safety improvement projects the company planned to complete this summer.

“As we look to address safety concerns as tenants of the port, we would have to go through the same lengthy process as someone who wanted to build a whole new tank farm” she said.

The Assembly voted to postpone a decision and scheduled a work session to go over the ordinance on May 18.