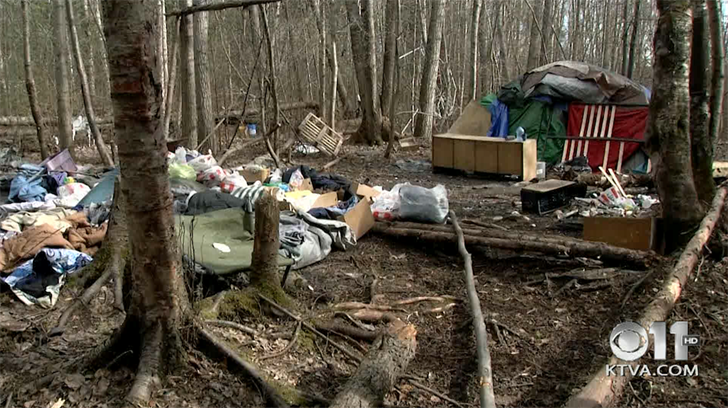 The push is on to clean up homeless camps in Anchorage. City Homeless Coordinator Nancy Burke said people should report camps on the municipal website, muni.org. She said many of the problems that plagued the reporting system last year have been fixed.

“We’ve been able to improve the functioning of the portal system where you provide information,” Burke said. “(Now) community members get an email back through several steps of the process including at the end when the camp has been cleaned up.”

But, Burke said, cleaning up homeless camps is only part of the push the city is undertaking. The other is to connect with people who are actually living in the woods to see if they could benefit from services including the big goal of permanent housing.

According to Burke, campers are still being notified they have 15 days to relocate. But they are also asked if they want to give contact information so they can be visited by a social worker. Burke said many of the homeless who were routed out of camps last summer are still at local shelters and involved in the process of moving forward toward housing.

Burke said another group the city will target this summer is panhandlers. Panhandling is not illegal, according to Burke, but drivers who lure panhandlers into the roadway to give them money could be cited. Burke said the city can’t kick panhandlers off the street because it’s an issue of free speech but they can offer them services.

“We know that panhandling will help them through that day but it doesn’t help them get to housing,” said Burke. “So we want to work with them with case management and services so that they can get out of that situation.”

Burke said some of the outreach teams will include people with medical training who can deal with health issues when they find them.

She also said Anchorage Assembly members will soon decide whether two overflow shelters can stay open year round so that more people can come into shelter.