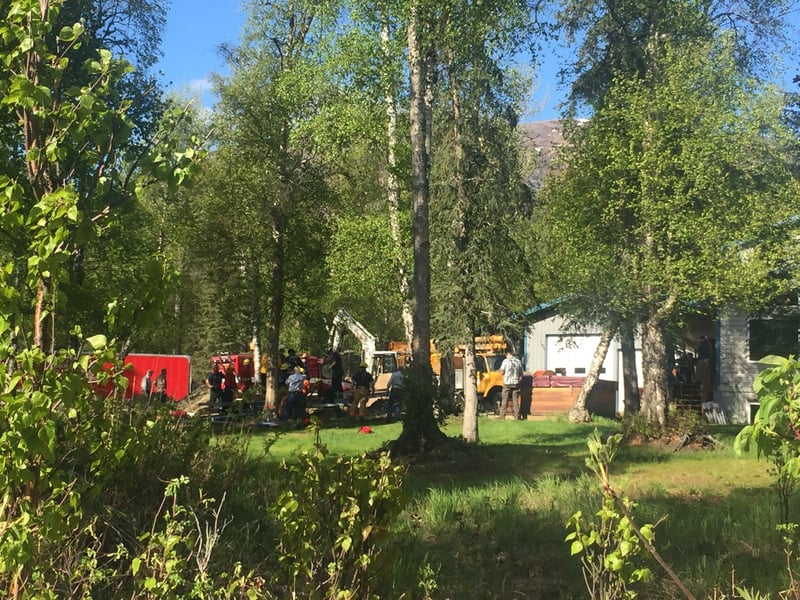 The Anchorage Fire Department conducted a confined space rescue on private property off North Witherspoon Road off of Maude Road.

The Mat-Su Borough Fire Department says the two trapped individuals were found to be alive and were in good spirits and talking with first responders.

Emergency personnel worked to stabilize the trench and set up scaffolding to hoist the trapped persons out of the trench.

Around 6:15, one of the trapped individuals was freed from the trench. He was seen moving his hands and arms as medical personnel carried him away. The other person was rescued shortly after. They have not been identified.

Crews from Anchorage were called in to assist, and LifeMed was requested at the scene.

Mat-Su fire officials say the two men were digging a trench for a well on private property, when a wall collapsed, trapping them 15 feet below ground with dirt up to their waists.

Mat-Su Fire and Rescue attempted a rope rescue, but the wall was too unstable to get them out safely.

“We had to scramble for the cavalry and the cavalry came, and it was in the form of Anchorage’s team that does this kind of work,” said Feather.

Anchorage’s specialized Confined Spaces Rescue team was able to shore up the unstable portion of the trench, then send in two rescuers to help dig the men out.

“It was a very specialized rescue that we were engaged in, and it wasn’t just two guys crawling in the hole to work with these folks, it takes a lot of technical skill to be able to put together the shoring that’s required to keep everybody safe,” said Feather.

Both men are out and safe. Here's a look at that hole! @ktva pic.twitter.com/PEGQXsyP26

He praised a quick response, and teamwork between multiple agencies for the successful rescue, “It was a great win, great win today, and those two guys, I’m so happy they’re out of that ground right now!”